How much did I pay for this interconnect ? I am somewhat embarrassed to say. On the lookout for an upgrade from the Acrolink A-2110, looking at one of its higher end brethren seemed like a logical choice.

Speaking to the ever helpful Steven Cheah of Audio Basic in Adelphi, he suggested looking at the Acrolink 6N A-2400II. Residing at the top end of Acrolink’s 6N range, it is more than double the cost of the Acrolink A-2110.

Was anything wrong with my A-2110 ? Not really. It was enough to impress me in listening tests to warrant a purchase. And having listened to the whole gamut of cable out there from DIY Belden and Klotz to Audioquest, Mogami, XLO, Crystal, Siltech, that counted for something.

The A-2110 is a rather plain looking cable with a nude colour outer sheath terminated with very nice Acrolink RCA plugs. During listening tests when I first bought it, it quickly distinguished itself compared to the A-2050 II and A-2200 II which are the entry level models in Acrolink’s line-up. You can refer to http://www.acrolink.jp/english/products/6n_a2110_2.html for more information.

The A-2400II in comparison is a very impressive looking cable with a transparent gold insulating jacket, with the braided shield underneath quite visible. The RCA plugs in particular are a work of art. They are heavy, well made, and are rhodium plated. Part of the barrel is made out of carbon fiber. Full specifications are available at http://www.acrolink.jp/english/products/6n_a2400_2.html

The A-2110 has the characteristic Acrolink house sound – light, delicate with emphasis on a neutral midrange and shimmering highs, with very natural air around instruments and decay from transients. If the A-2110 had one drawback, it was the relative lack of bass compared to its sparkling highs.

Anyway, it was decided at Audio Basic that we would not test cables beyond the A-2400II simply because I was not willing to spend that much money on wire. A selection of tracks from Eva Cassidy’s Live at the Blues Alley were selected for comparison purposes.

By the end of the comparison, it was evident that the extra money had to be spent on the A-2400II. In fact, the miser in me had hoped that the A-2110 would prove more than sufficient. The A-2400II strikes you immediately as being a very quiet cable with absolute control over both ends of the frequency spectrum. Initially, it appears to be less dynamic than the A-2110. Further inspection reveals that the dynamics of the A-2110 are partly due to the slight messiness of its presentation. The crash of cymbals etc and resonance from percussive instruments can be slightly smeared in comparison. Also, when things really got busy, the A-2110 had a tendency for instruments to get lost in the mix.

As a matter of interest, my non-audiophile partner was asked to listen to 6 different interconnects. She commented on how similar the A-2110 and A-2400II were in terms of balance, although she had a preference for the A-2400II which in her words was simply better.

It was nice to see that diminishing returns did not set in for the A-2400II and the money spent was justified as compared to spending the extra dosh on upgrading other components in the system. IMHO, the expense of the A-2400II is fully justifiable in high end set-ups, where it is really able to strut its stuff.

As a matter of interest, I acquired a second hand A-2200II recently for another set-up. It is darker sounding than the A-2110 and has less treble refinement and extension. For that reason alone, I preferred the A-2110 which is more suitable in my setup.

A year or two after originally writing this post, I managed to get hold of the entry level 7N model, the A-2070 (please see my separate post on this). The bottom line for Acrolink is that you get what you pay for, with a corresponding increase in resolution, refinement and bass quality as you go up the range.
No comments:

Over the past few years, I've dabbled with a number of "digital" amps (they actually aren't digital, but that's a whole separate discussion) and have had positive experiences with some of them to consider them seriously for a permanent place in my hi-fi systems.

I remember my first experience, the first generation Sonic Impact amp based on a Tripath chip with 5W output. The gasp that came from the small group that had gathered at my house was not really related to the sound, but more the shock that the tiny little amp could drive my Monitor Audio bookshelf speakers, powered by 8 AA batteries no less !

The Hypex was purchased second hand through a local hi-fi forum and was assembled by local modder and DIY supplier, James from Effective Audio Mod.

Here are some photos including some a shot under the hood. As you can see, it is a dual mono design with separate transformers and power supply boards for each channel. There is a motorised Alps potentiometer in front with a toggle switch, so you can use it as an integrated amp or power amp. 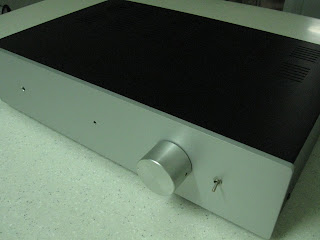 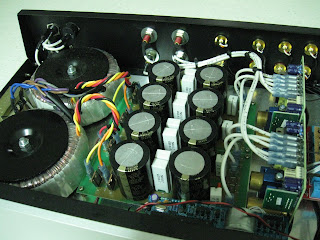 The bass is quite well rounded with a certain amount of fullness (reminds me a bit of my tube amps ... of course my tube amps have much less control in the bass region). Its midrange is quite neutral with this balance maintained up to the high frequencies.

Amongst all the "digital" amps I've owned or heard, this one has the most pleasing highs. It doesn't sound etched, or dry. There is a nice sparkle and the communication of acoustic space is excellent. When listening to Patricia Barber's excellent drummer, the way the high hats shimmer is absolutely sublime. In case you think I really like this amp .... I do !

The above is with the built in passive potentiometer (Alps blue velvet). Paired with a Diva M7 tube preamp, the midrange becomes slightly fuller with the high frequency maintaining their shimmer but losing a bit of separation in favour of a slightly more organic presentation.

I also found that the Hypex matched very well with my Thiel CS 1.6. It had just the right balance to warm up the bass while maintaining the Thiel's neutrality and speed in the midrange and treble. What if you can't afford the Hypex ? Think seriously about a Tripath amp if you can get away with its power limitations. I have a Kingrex T-10U that I'll write about soon.
No comments: