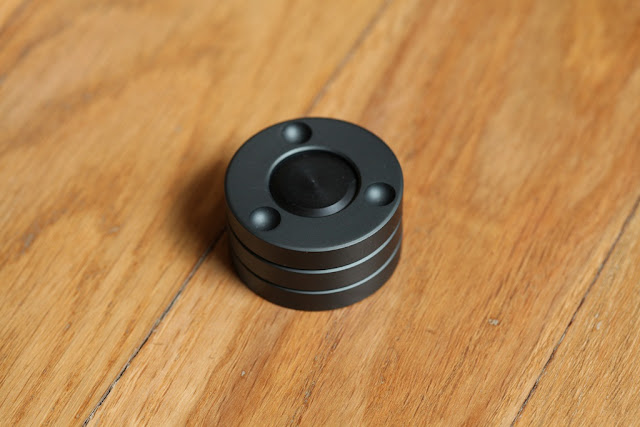 The top and bottom discs have a further 3 circular depressions, to aid stacking if you wish to do so. You will obviously need to find an additional 3 ball bearings to do so, although none are provided. The whole assembly is sealed and the discs and ball bearings all stay in place.

The assembly can be opened by carefully applying some pressure to the central column and rotating the top and bottom halves in opposite directions. The two halves are coupled via a finely threaded rod. 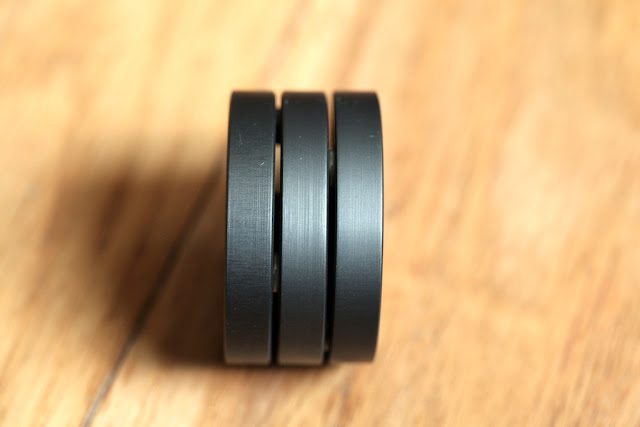 The footer on test here is the base aluminium model in the line-up. More expensive models include a ceramic coated model, and a diamond coated one. In any event, the aluminium model sells for a not modest sum - S$500 for a set of four.

I initially intended to use all four footers, but settled on using three instead. Using four footers was an uphill battle, involving copious amounts of paper as shims to try and balance out the footers perfectly. In this respect, I am far fonder of height adjustable footers, like the Finite Elemente Cerabase.

My evaluation of this footer ended up taking far longer than usual, as it ended up under a whole  variety of equipment, including my mains distributor, DAC, preamp, poweramp, and even my Entreq Tellus grounding conditioner.

The Darkz consistently added a focused precision to music, with instruments and voices being very specific and pin point. There was also an increased sense of texture and decay. Soundstaging was presented in a more distant manner, which helped increase the feeling of depth in the system. On the downside, the overall tonal balance was leaner. The reduction of midrange warmth, together with the accentuation of leading edges tended to emphasize sibilance in my system. I also felt that the increased decay resulted in a perception of reduction of speed. In simpler tracks, with just a female singer, accompanied by a Piano, this was observed as a reduction is impact and scale of left hand notes, and a leanness in the female voice.

The above observations generally held true for most of the equipment I tried the Darkz with. After extended listening sessions, I eventually preferred my system without the Darkz, as I did not feel that the tonal balance of my system was going the right way.

After some head scratching, I decided to disassemble the Darkz and place small strips of fo.Q (TA-52) damping tape on the inner facing sides of the top and bottom discs. This reduced the slight glare and leanness of the stock Darkz. As like all other tweaks, your mileage may vary.

Close two years after the initial review, the local distributor for Ansuz, Giraffe Signature suggested that I give a five and four tier Darkz a try, as well as experiment with additional ceramic balls between the footer and the component being supported. To facilitate this, I was passed a bag full of ceramic balls (plenty to try out almost every configuration possible), and a five tier Darkz.

As I have long given up trying to balance 4 pieces of Darkz, I instead tried a set of three under my Cary CD-500. I also tried some of these configurations under a friend's tube integrated amp in his setup.

I tried this again to refresh my memory and my impressions were not changed. The stock footer was simply too analytical for my taste.

Add in three ceramic balls on top of each footer and this is a wholly different ball game (pun intended). There is an improvement in smoothness, bloom and length of decay. I still felt that there was a slight bit of an edge to music, but it was still a massive improvement over the stock footer.

A lower noise floor with a smooth, articulate and nice bloomy sound. Any previous complaints were now complete forgotten.

Even longer decay and shockingly low noise floor. This is my favourite configuration. It worked very well also in my friend's setup.

I felt that this improved edge definition but that slight hardness was back. Some guys would like this combination, as it offered the best of both worlds (at a price), but I preferred the glare free sound of the Four Tier and Five Tier configuration. So did my friend when we tried it in his setup.

The above configurations are well worth exploring for Darkz users. Moving from one stack level to the next mainly affected the noise floor, resolution, articulation and length of decay. It was interesting to note also that the staging and tonal balance was quite similar once you hit a three tier level with additional ceramic balls.

Perhaps Ansuz should have launched the product as a four or five tier footer from the beginning ? Well, better late than never.