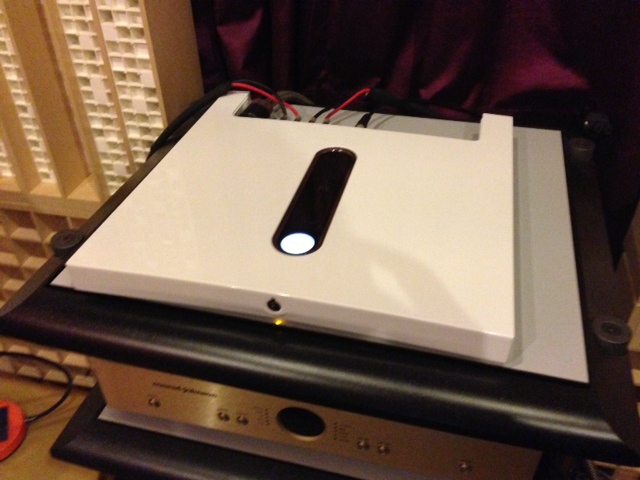 Do excuse me for the grainy picture that was taken after a late night session. As can be seen from the picture, the Devialet D-Premier is a beautiful piece of art designed specifically to weigh yourself and your hi-fi toys. Well, at least that is the first thought that comes to mind.

The D-Premier could probably charm alone on looks, with its beautiful top located display, and subtle amber operation light - the industrial designers deserve a pat on the back here. Watch out for the rear panel though - connections here are quite tight.

Truth be told, the D-Premier is an incredibly versatile amplifier that combines an integrated amplifier, Wi-Fi streamer, DAC and Phono Stage - all in a compact chassis that is light enough to be carried under one arm. 240 watts per channel enables the D-Premier to drive most speaker loads on the market. The unit on test is an older version without Ethernet and USB plug in capability, although the RCA jacks can be configured to accept SPDIF digital signals with up to 24 bit resolution and 192 kHz sampling rates. The online configurator and remote control get special mention. The configurator allows customisation of inputs and a whole host of other options. This is then loaded on to a SD card which is read upon boot-up of the D-Premier. The remote control works via RF and is sensitive, without requiring line of sight. I regretted not taking a picture of the very classy and beautiful remote control.

This unit was kindly brought over by a friend, S who is currently using the D-Premier with his Focal 1028 Be speakers. We listened for a short while to my setup before replacing my Conrad Johnson Classic 60 SE with the D-Premier on the rack. We tried three different input configurations, using a coaxial SPDIF feed from my Mac Mini (using a Bel Canto u.link as an USB/SPDIF convertor), using analogue inputs from my Calyx Femto, and via Wi-Fi streaming from a Windows notebook computer.

The D-Premier was first hooked up via its coaxial input, with the HiDiamond P3 power cord supplying mains power. The noise floor was far lower than my Conrad Johnson and retrieval of very low level information was superior. This was not surprising given that my system has a moderate degree of tube noise. We had selected "A Case of You" from Diana Krall's album, "Live in Paris" as one of the test tracks. I was not familiar with this track and heard a cough shortly into the start of the track on my Conrad Johnson. With the D-Premier, it was obvious that there were multiple coughs throughout the track and other small subtle noises from the audience.

Imaging was very precise with a high level of resolution. The D-Premier had a surprisingly sweet and slightly full midrange. Some ICEPower based amps I have heard in the past, had artifically tight (and rather one-note) bass, and dry / flat high frequencies. Happily, the D-Premier does well in this regard with natural bass presentation and sparkling high frequencies, without sounding too bright or analytical. However, I felt that the D-Premier presented a flatter and narrower perspective.

We changed power cords at this point and it was obvious that the D-Premier was highly sensitive to power cords. Using an Acrolink PC-7100 in place of the HiDiamond immediately resulted in improved soundstage depth, width and fluidity in articulation. We also tried the Acrolink PC-7500 which in my opinion was jaw dropping although S felt that they were quite close in performance, and compared to the HiDiamond sounded slower in terms of pacing and drive. D-Premier owners should liberally experiment with power cords to find one that suits their system and taste.

Moving on to the analogue inputs (which are converted to digital by an A/D convertor), we felt that this was comparatively soft and laidback in presentation. From a logical and purist point of view, it seemed to make little sense to go through D/A conversion (via the Calyx Femto) and then convert the analog signal back to digital. However, there was no catastrophic loss of fidelity as feared, and we probably would have been quite happy if not for a direct comparison to the digital input which we started off with at the beginning of the session.

The Wi-Fi comparison proved difficult as S was controlling streaming via J River which had upsampling enabled. I would avoid making any judgements there given the excessive variables in play.

Both the D-Premier and Classic 60 SE are to my ears, good matches for the Focal Diablo, the final determinant being personal preference. The D-Premier is not cheap by any stretch of imagination and you do not really save much over conventional separates. S was quick to point out that we saved on rack space, two power cords, and two pairs of interconnects. Well, if I count my phono stage, then throw in savings for further rack space,  another pair of interconnects and a power cable too, we do have some savings afterall !

S preferred the match with the D-Premier, while I preferred the Conrad Johnson. The D-Premier to my ears had a cooler disposition, with superior separation and low level detail retrieval. It did better for rock too, which I seldom listen to. On the other hand, the Conrad Johnson had better three dimensionality, with bigger image sizes, and more bloom with the human voice and instruments. It also did better in retrieval of acoustic space and subtle shading of the music and vocals.

Do keep the D-Premier on your shortlist if you are looking at the price sector. It has unique strengths, and this is one of the few products I know that could fit in with modern decor and be a unique all-in-one solution (with a computer streaming the data elsewhere), without a feeling of compromise in fidelity and power.

The local dealer in Singapore is AV Intelligence.

A Happy Father's Day to all audiophile fathers out there.

My daughter asked me some questions to help her complete a "survey".

I received this later in the day. 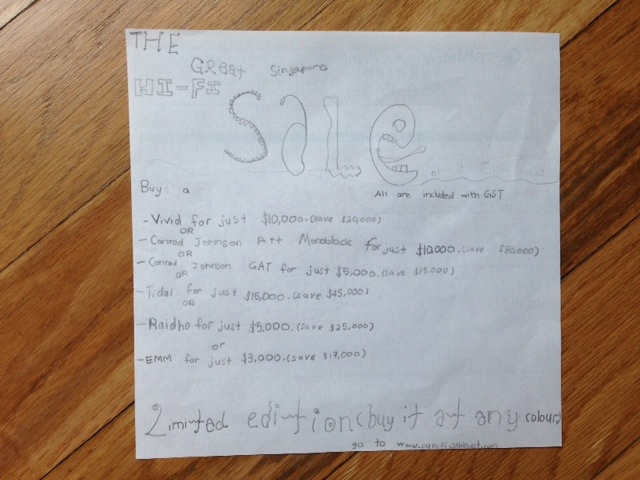