Mains conditioning is often an essential tool in achieving good results from quality equipment, unless you happened to be blessed with good mains power. You have transformer based solutions, such as isolation or balanced power transformers. You also have capacitor based filtering, which tackle a certain frequency range based on the tuning of the circuit. There are also other approaches such as choke filtering and power regeneration.

The LessLoss Firewall Module uses the company's proprietary skin filtering technology first seen in their power cords. The wire surface is treated to allow the mains frequency to travel through efficiently (50 Hz or 60 Hz as the case maybe), while attenuating high frequency noise. Since no capacitors are used in the process, there is no limiting of current.

The LessLoss Firewall Module (hereinafter referred to as "Firewall") is available in two versions, a module with C13 and C14 connectors, and a module with screw terminals. The former would allow quick hookup between any component and  your existing AC cable, while the latter would be more suited for direct installation inside a component, mains distributor or any other application limited by your imagination.

Deploying the Firewall definitely made a difference to the sound, although its effectiveness seems to be quite dependent on the component being used. In my office head-fi setup, using a single piece on my Marantz CD 6003 cd player worked best in firming up bass lines, reducing harshness on high frequencies, and improving the preciseness of imaging and staging. However, the system became overly dull and smooth when adding a second unit to my Schitt Lyr headamp. Similarly underwhelming results were obtained when I tried stacking two modules together.

I had mixed results on various locations, such as my Gryphon Diablo integrated amplifier and my Zodiac Antelope Platinum DAC. I hit the jackpot when I moved the LessLoss module to my Audio-Gd NFB 10.2 DAC / headamp, with very similar improvements as noted on my Marantz CD 6003.

While the Firewall did not work as a fit-and-forget solution, the results under ideal conditions were intriguing enough to warrant further investigation. I promptly bought two units of the DIY version for further experimentation.

I saw the Thiel TT1 some time back at Sound Decisions, the local dealer for Thiel. The company has with a change in management and ownership, taken a very different direction with it's products. I made an appointment with Sammy Low, principal of Sound Decisions to have a quick listen to the TT1 sometime later.

The TT1 bears little physical resemblance to past models. The TT1 is a four drive speaker in a slim rear ported enclosure. High frequencies are handled by a 1 inch titanium dome tweeter, while a 4 1/4 inch fibreglass cone handles the midrange. Low frequencies are taken care of by two 6 1/2 inch aluminum cone woofers.

Frequency response is stated as 39 Hz to 30 kHz (no limits stated), while in-room sensitivity is rated at 90 db. Impedance is specified at 4 ohms nominal and 3.67 ohms minimum.

The drive units are not Thiel's in-house designs - according to Thiel's official website, the woofers are produced by Scanspeak to Thiel's specifications. 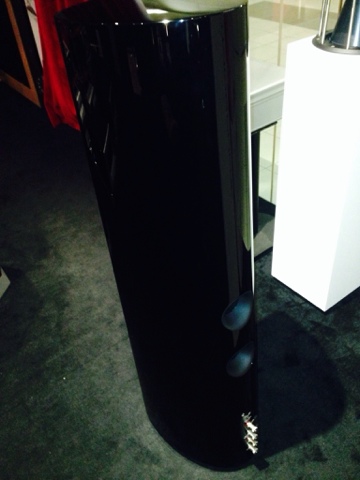 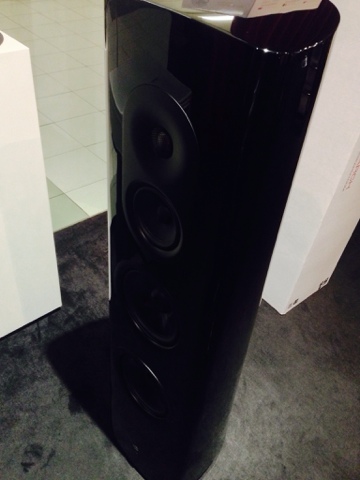 If you are a fan of the late Jim Thiel's work, you probably already know that the TT1 does not attempt to follow his key design objectives, i.e. a time-aligned and phase coherent design. My first "high-end" speaker was the Thiel CS 1.2 (definitely high-end to the wallet and ears of the young school going person as I then was), and I subsequently bought a CS 1.6 and a 2.7 (which I still have today). I decided it would be best to approach this speaker with an open mind, rather than to evaluate the TT1 as a continuation of legacy models - it clearly is not, and neither is it trying to.

The TT1 was setup for me with a Bel Canto digital front end, and an AVID turntable rig. Amplification was handled by a VTL preamp and monoblock amplifiers.

Earlier Thiel models had a tendency to sound clean and transparent. You could never accuse them of sounding fuzzy, nor euphonic. They were true to the source, warts and all. With careful setup, and suitable partnering equipment, they were holographic and delivered amazing amounts of detail. When you got it wrong, they could sound lean, harsh and flat.

The TT1 is voiced very differently. Mid-bass had a warm and rich bloom to it, while the midrange was velvety smooth. The top-end had the right amount of life and expression, ensuring that the recordings are reproduced with a certain amount of air and sparkle.

Soundstaging and imaging were good, with a comendable portrayal of instrument placement and the recording venue. The TT1 sounded pleasant at all times, maintaining its composure as the volume was increased.

On the downside, deep bass was lacking (not surprising given the limited internal volume of it's cabinet). I also felt that the TT1 took the approach of trading off accuracy for musical enjoyment. This is not necessarily a bad thing and will suit owners who just like to sit back and enjoy their music, instead of trying to hear exactly what was done by the recording engineer.

At the end of the audition, I felt that the TT1 was worthy of serious consideration, and delivered quite a lot for it's price tag. No, it will not please the fans of legacy Thiel products. However, it will please the person looking for an affordable, well-finished and easy-on-the-ear speaker.