I managed to acquire an almost mint condition pre-owned Marantz CD6003 recently. Brand new, this CD player is priced at a modest SGD 388 in Singapore, pricing it in the mid-entry level category.


Once upon a time, long long ago, a CD player of this build and sonic quality would cost at least two to three times the retail price of the CD6003. It's nice to see that the price of quality kit like this has come down over the years.


The CD6003 is quite a handsome player and has good build and heft (slightly over 5 kg). The chassis is fairly rigid with a double layered bottom plate and compared to the SA8003, the immediate giveaway in cost cutting is an extremely flimsy CD tray.


Based on the Cirrus Logic CS4398 DAC and Marantz's proprietary HDAM SA2 analog output stage, the CD6003 packs fairly advanced technology for a player of its modest price.


An IEC socket permits you to play around with after market AC cords if you wish. 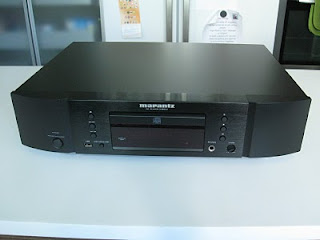 Popping the hood yields no surprises, with three circuit boards connected by ribbon connectors. The left board is the power supply section with two separate power supplies. one linear and the other switched mode. 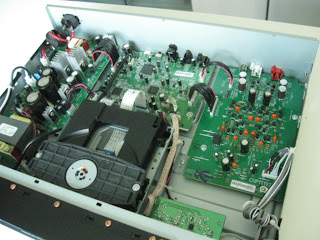 There is a lot of information out there on modding Marantz CD players, the most famous being the infamous CD63/67 modification thread on DIYaudio. Limited this time by lack of a service manual, I decided to just do a few tweaks that were easy and bang for the buck. The CD6003 is intended for use in my office and I did not wish to spend too much time or expense in this project. Besides, if I wanted a reference class CD player, I would have bought a better one to begin with.


Over the years in modifying Marantz CD players, the most dramatic difference in my humble opinion comes from upgrading the DC blocking capacitors. So far, the Marantz players I have handled (63, 17MkIII and now the 6003) use a pair of Elna electrolytic caps back to back to make them non polarised. Usually I bypass them completely after determining that there is no DC offset. Unfortunately this time around, DC offset was quite high at 150mv. I don't usually try film capacitors in this location due to space limitations and the high value needed to avoid bass roll off. So, a pair of 6.3V 22 uF Rubycon Blackgate HQ NX non polarised caps were used to replace the existing 4 Elna Silmic caps used. I also usually remove the muting transistors, but decided to leave them alone this time.


Next, came the digital power supply to the CS4398 DAC. The local decoupling cap was changed from a 100 uF Koshin cap to a Sanyo Oscon cap of the same value. The stock circuit bypasses this cap with a small ceramic cap which I left in circuit. I have very good experience with the Oscon in digital power supply decoupling and cathode resistor bypass applications.


I also added some blu tack on the oscillator crystal, the CD transport bridge and the transport frame (not visible in my pictures). 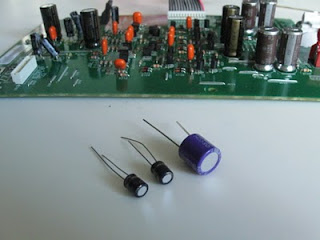 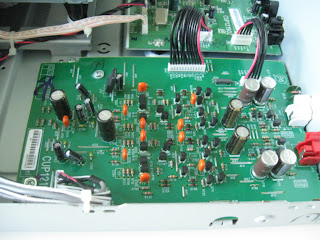 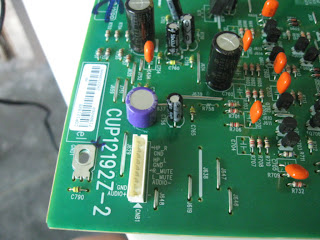 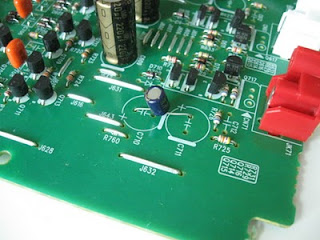 Total cost of the modifications is less than SGD 20.


Extended listening was done to the modded and unmodded player on my main system which consists of  Focal Micro Utopia BE speakers driven by the Cary SLI-80 Signature Special Edition. Comparisons were also made with my usual CD player, the CEC TL-51XR.


In stock form, the 6003 is a competent player that punches well above its price class. It's sins are one more of omission. It is a smooth sounding player with decent bass and high frequency sparkle. Its failings in comparison to more accomplished machines are a lack of solidity, and somewhat homogeneous presentation of detail.


1. Eva Cassidy - Fields of Gold : Compared to the CEC, Eva's voice was somewhat vague in imaging. Her accompanying guitar was somewhat lacking in bite and body and blended into the background. There was an obvious lack of retrieval of ambience from the recording - the acoustic space from this track which was recorded live at The Blues Alley was not well conveyed.


2. Patricia Barber - Summer Samba. The percussion work about a minute into the track did not have the shimmer and air of the CEC. The fine detail in the high hats etc were not well separated and sounded somewhat lost in the mix. Piano notes were not realistic as they sounded a bit plasticky and lightweight.


3. Rebecca Pidgeon - Spanish Harlem. The sound of the shakers was quite similar. On the CEC, each shake was distinct and varying in image height and volume.


After modification and about 20 hours of burn in.


1. Eva Cassidy - Fields of Gold : The center vocal image is dead center. There is an overall increase in resolution with each pluck of the guitar being more distinct. Vocals are more distinct and Eva's voice has distinct varying shares of texture.


2. Patricia Barber - Summer Samba. The fine details in the high hats were better separated and the shimmer and air improved. Piano notes become a little more solid and more stable in pitch.


3. Rebecca Pidgeon - Spanish Harlem. The differences in each movement of the shaker was more easily discernible.


In summary, the modifications improved midrange transparency and  ambience retrieval. Vocals seemed to benefit the most, with the homogeneous nature of the stock player being significantly improved. Although there was increase in weight and solidity of the upper mid bass, the low bass notes did not seem to be improved by the modifications.


The subjective quality of the player was significantly improved but still quite far from the CEC. In separate listening sessions, the differences were quite liveable, but instant A/B comparisons showed that even modded, the 6003 was no CEC slayer.


Lastly, I tried a trio of Finite Element's Ceraball footers under the 6003. The improvement in quality was shockingly good and at least equal to the cap modifications. If we consider the 6003 in stock form to be about 40 % of the quality of the CEC (not bad if you consider that the CEC is more than 4x the cost of the 6003), the cap mods and Ceraball would bring the 6003 to around 60 % of the quality of the CEC. 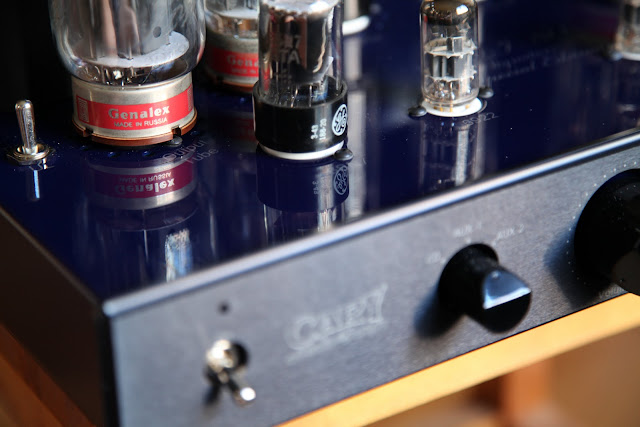 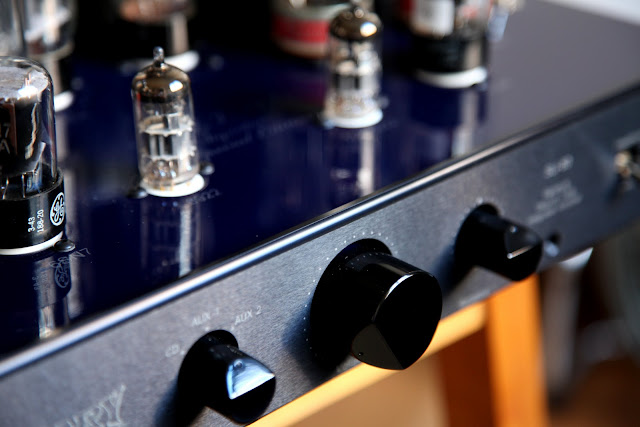 Initial impressions were that of a very powerful sounding amp with good grip on the bass (not always a given with tube amps), but a slightly coarse midrange and moderate resolution. Thankfully, the sound opened up and the coarseness disappeared after a few hours of play time.

It runs even hotter than my Cayin A-88T which tells you something !  Don't even think of placing this in an enclosed cabinet.

The power supply is choke loaded and tube rectified by a pair of 5U4 rectifier tubes.

Noteworthy features include basic remote control, switchable triode / ultralinear mode and a headphone output (run from the tubes and not opamp based).

Driving my Focal Micro Utopia BE speakers, the Cary sounded best in triode mode. Ultralinear had more slam and authority but sounded a bit rough and bright in comparison. Strangely, my Cayin A-88T sounded better with the same speakers in ultralinear mode.

The Cary seems quite hard on the rectifiers, and I experienced arcing more than once when switching the amp on. Some audio forum posts suggests that this is due to excessive capacitance being used immediately after the tube rectifiers, but I won't comment on this since I did not open the amp to check the power supply layout.

I also do not like the stock equipment feet which feel and look like sorbothane feet. In tropical weather, they turn greasy and sticky rapidly, leaving unsightly marks all over your rack.

Sound wise, these problems are rapidly forgotten. This amp sounds wonderful. It is certainly not the most transparent amp around, but it did have just a smidgin more resolving power than the Cayin A-88T it replaced. What is gains over the Cayin is a much bigger presentation in the form of a very expansive soundstage and excellent bass authority (for a tube amp). The Cayin projects a flatter soundstage, with image sizes comparatively smaller.

Compared to my Almarro A-318B, the Cary has a warmer and thicker midrange and more extension and air in the high frequencies.


Tone is also more forgiving, with a more liquid and easy going presentation, without sounding dark or shut-in. In comparison, Cayin amps have a more solid state like sound, and may even be argued to be more neutral. If you prefer a slight rose-tinted glow to the midrange and the "wet"type of highs, look at the Cary first !