Virtue Audio is the new kid on the block in terms of manufacturers offering ICEpower based products.

ICEpower is by now quite established and there are many companies out there offering amplifiers based on their modules such as Bel Canto Design, Wyred4sound etc.

I normally do not write detailed reviews but was suitably motivated by the M5001 which avoids being a “me too” product by virtue (no pun intended) of its tube buffer supplied by Dodd Audio.

The M5001 is based on the ICEpower ASP500 module, which delivers 250 watts per channel into 8 Ohms and double the power into a 4 Ohm load. The ASP500 module includes a built in switching power supply and accordingly runs cool and efficiently.

The stock module input impedance is raised from 8 kohm to 100 kohm due to the tube buffer. This presents a much easier load for preamplifiers to drive, in particular tube based designs.

Appearance wise, the M5001 is quite handsome with a well finished case and lovely real wood veneer top. A variety of finishing options are available to customize the look of your amplifier. Round the back, an IEC power socket accepts detachable power cords, and input is via either an RCA or XLR balanced socket. A subwoofer output is provided.

The speaker binding posts deserve a special mention. The propeller posts make finger tightening a breeze. Both the binding posts and RCA socket are said to be made from gold plated Terrilium copper.

It is not quite the epitome of hi-fi bling-bling, but is certainly well finished enough to be proudly displayed on your equipment rack. 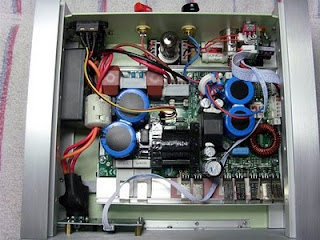 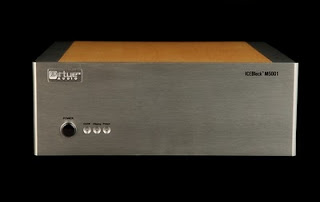 (Pictures from Virtue Audio's official web-site)
Dimensions are not quite shoe box like, with the width of the amplifiers being about 10 inches across. This makes placing each monoblock side by side a bit tricky for most equipment racks as you will find that the support columns will either block the AC inlet on the left of the unit or the input jacks on the right. The supplied feet are metal discs that screw into the chassis. As they project out of the chassis footprint, this makes each monoblock occupy a fair amount of real estate. The feet are easily removed though if you so wish.

Let us re-visit my impressions of ICEpower over the years :- extremely tight and powerful bass, high resolution and detailed midrange and treble, effortless presentation. The downside ? Dry midrange, lack of treble air and 2D like image.

After about 15 hours of burn in, and with the stock JJ 12AX7/ECC83 tube installed, serious listening sessions were conducted.

Preamplifier duties were handled by Diva Audio’s tube based M7. My M7 utilises a tube rectified and choke loaded power supply and has been upgraded to the latest specification by T.S. Lim with additional voltage regulators on the power supply and star ground wiring. The M7 can be best described as a linear and fast sounding pre-amp with both speed, dynamics and good bass authority.

After some trial with the speakers available at hand, the M5001 was matched with my main speakers, a Focal Micro Utopia BE.

The first impression was that of absolute control over both frequency extremes. Bass was tight and controlled.

Midrange is neutral with just the slightest hint of fullness.

High frequencies are extended with absolutely no loss of detail.

Resolution, in particular micro-detail is excellent with individual instruments in a mix being discernible even under the heaviest of mixes. One would be even tempted to flog the oft-used and abused audiophile claim of hearing detail in familliar recordings that went previously unnoticed.

The tube buffer would appear to mitigate much of the criticism I had against ICEpower. Images are fleshed out with proper depth while treble air and the sense of acoustic space are delicately conveyed. I did not see any downside from the installed tube buffer since all the things I liked about the stock module remained – no slowness in transients, or loosening of bass grip.

All that being said, this is by no means a tube-like amp. If you want tube liquidity, get a tube amp – this is not going to float your boat. The tube buffer does not honey coat the sound, it imparts a subtle warmth and organic flow to the dry sound of the stock module. Tonal balance wise, it still remains on the right side of neutral.

Choice of tube used in the buffer as well as pre-amp used could go a long way to tuning the sound the way you want. As far as I am aware, the M5001 can be used with most of the 12A*7 family tubes, enabling fairly cheap and flexible tube rolling, since you can avoid the insane pricing in the 12AX7 family and go for cheaper equivalents in less popular families like the 12AT7 for example.

Hyper-detailed and analytical with the subtle touch of liquidity and warmth – coupled with loads of power to control almost any speaker out there on the market. Take into account its relatively modest price, and I think Virtue Audio has an absolute winner on its hands.
6 comments:

The Acrolink 6N S-1400II sits about mid-way up in Acrolink's 6N speaker cable range and is a large gauge version of the S-1000II.

Full specifications of the S-1400II can be found at

The S-1400II is a heavy but flexible cable and termination into your plug of choice is not difficult. There isn't much buzz about Acrolink speaker cables compared to their power cords (the 4030 being the most prominent of their line-up) and interconnects to a lesser degree.

If you have a look at my previous forays into the Acrolink family, I have come to a personal conclusion that Acrolink has a house sound - a delicate midrange and a high frequency extension and air that is not sonically neutral but artistically beautiful.

The S-1400II has the same delicate and refined midrange but a harmonically rich and heavy mid-bass and bass. In a complete Acrolink set-up, the combination works very well to add weight to the bottom end of the spectrum (which is not an Acrolink strength) as well as to keep the highs under control. Substituting out the S-1400II for a pair of Clear Day Audio Double Shotgun or a Goertz AG-1 (both cables are co-incidentally pure solid core silver cables) tipped my main system (Focal Micro Utopia BE) into excessive high frequency energy and harshness.

However, using the S-1400II in another darker system was far too much and the overall result was a shut-in sound that had the speed of molasses.

I suppose the difficulty in matching the S-1400II accounts for the number of used pairs up for sale (at steep discounts mind you) on local hi-fi forums. It's laidback and rich presentation mandates careful deployment. Unlike some other harmonically rich cables like the Canare 2S16 and 4S8 though, the Acrolink is far more transparent and resolving.

I have noticed that when using Acrolink cabling in pre / power set-ups, better results were obtained in my system by using a single Acrolink (A-2070II) between source and preamp, and an Acoustic Zen Silver Ref-II between the preamp and poweramp. This was better compared to using an Acrolink 2400II in place of the Acoustic Zen.

If you are interested in Acrolink speaker cables, have a look at my short write-ups on the 7N S-1000III and 7N S-1400III.