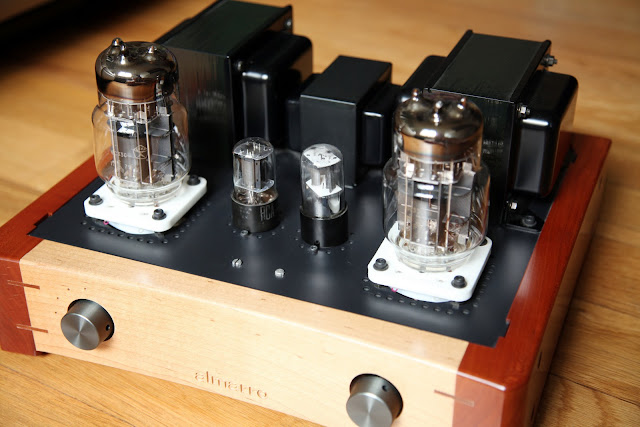 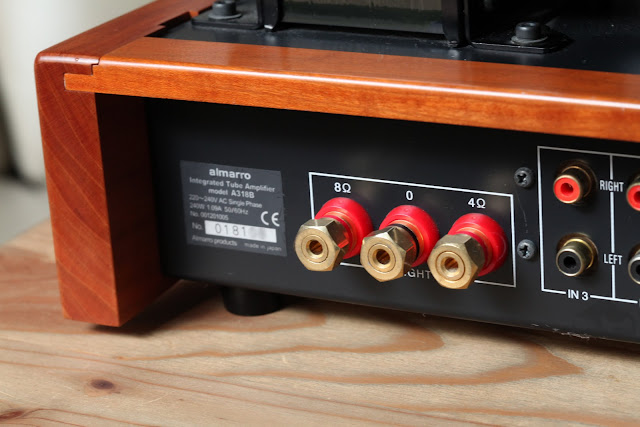 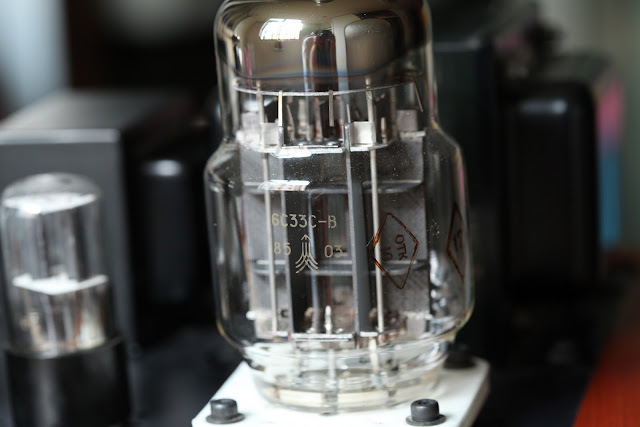 Russian 6C33C double triode. From Soviet era missile and Mig Foxbat service to consumer audio. How the world has changed ! 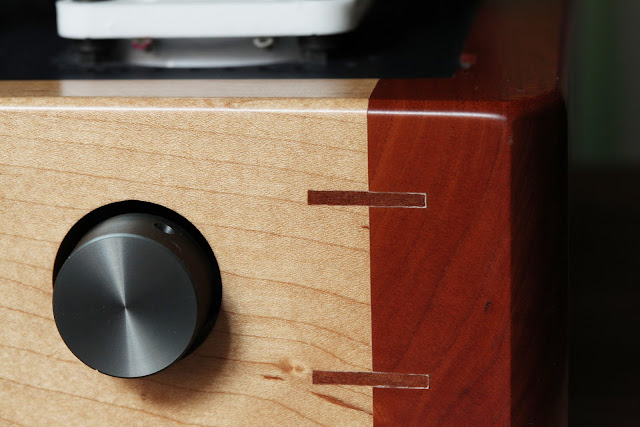 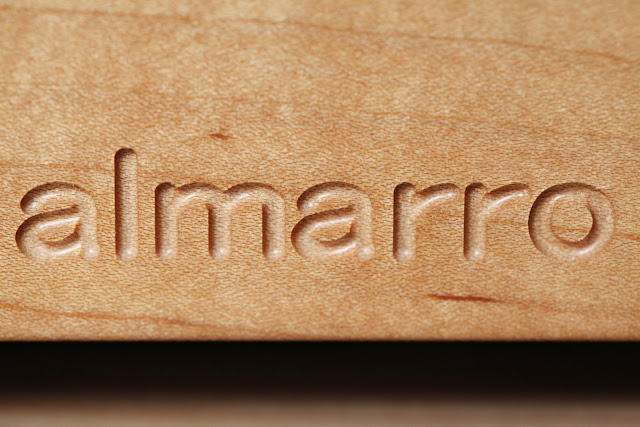 Carved logo on the front panel. 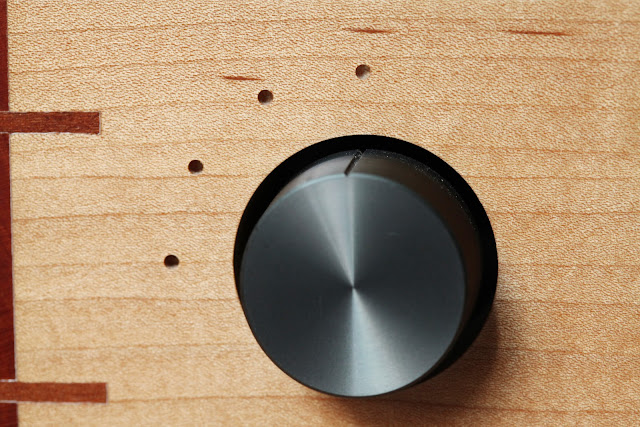 Input selector. There are 3 inputs. The first indent is mute. 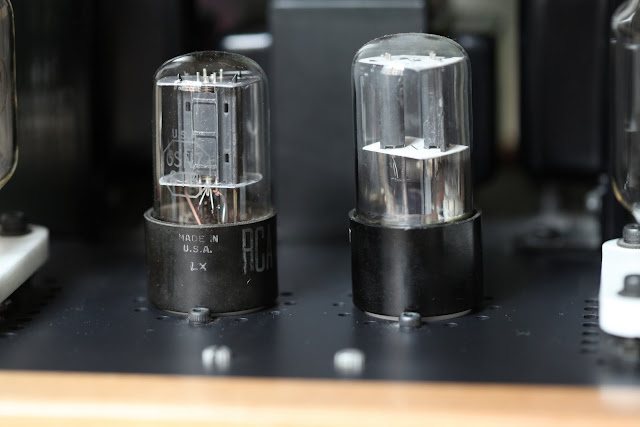 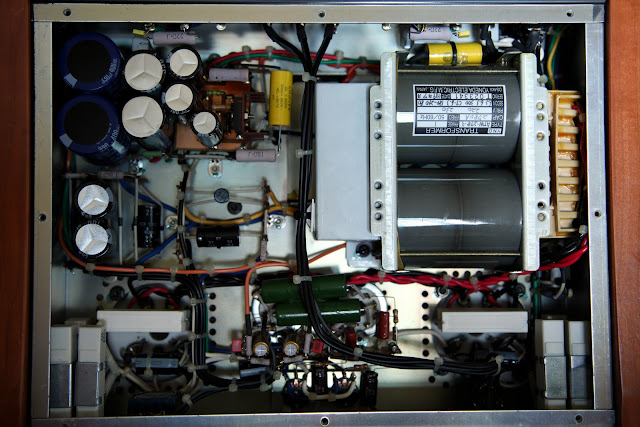 Power transformer is inside the chassis. The exposed center "transformer" in the first photo is in fact a power supply choke. 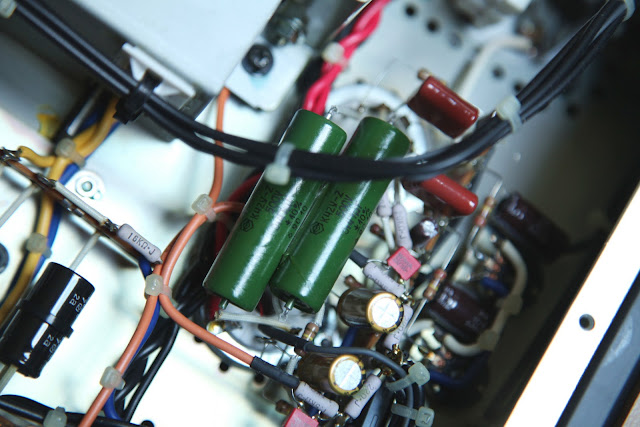 The Almarro A-318B is quite an unusual beast. Single-ended triode and assembled by hand in Japan, the A-318B is affordable, beautiful and powerful - typically these words are not seen together in the same sentence.

Being an integrated amplifier, you save quite a bit of useful money. Total up the cost of a preamp, with an additional power cord, a pair of interconnects, footers, etc, and you realise that the savings are not insubstantial.

Despite its compact proportions, this is quite a heavy amplifier, tipping the scales at close to 20 kg. Much of this weight comes from its massive power and output transformers. The next thing that hits you is the sheer amount of heat produced, not just from the very hot running 6C33 power tubes, but from inside the chassis. An hour or two of operation even in an air-conditioned room will guarantee you a nice and toasty top plate and volume knob.

Operation is generally fuss-free and uneventful except for two things. First, the bias tabs (sitting underneath the tube socket base) may be accessed by itchy fingers - owners with children please take note ! The position of the two tabs are dangerously close to the top plate and accidental contact is not only possible but very likely, especially if you have a habit of biasing your amp in your dimly lit man-cave, after a beer ot two. It is far safer to take the bias from the two metal screws directly above the tabs on the ceramic tube scoket base. Secondly, I had intermittent contact with one of my power tubes. This traced back to a slightly loose tube socket. My amp is about 3 years old and was bought pre-owned. Anyway, I re-tightened the sockets with insulated needle nose pliers (you have to turn the amplifier over and take off the bottom plate to do this) and did not have any further incidents.

Right off the bat, it is obvious that the Almarro has more drive than its low power suggests (18 watts SET, but my set was delivering probably close to 15 watts at maximum due to my choice of a slightly lower bias point).

In the lower frequencies, the Almarro is no shrinking violet and has enough grunt and slam when driving my Focal Micro Utopia BE speakers (90db sensitivity, 8 Ohm load). The bass is not the most extended or deep (leave that to my Class D amps) but has sufficient heft and articulation. That being said, the Cary SLI-80 has deeper and more powerful bass.

Coming to the midrange, this is probably where the Almarro defines itself. Vocals have a beautiful glow and are open and realistic. Brass instruments and strings are equally well portrayed, with more emphasis on tone and acoustic space.

High frequencies are similarly open with cymbals shimmering in the right way with correct emphasis on both the transient and the decay.

The Almarro is a beautiful amp designed to appeal to the emotional side of things. From the logic side, the Almarro does not have the best of extension at both frequency extremes. It is easily bettered by the Cary SLI-80 in this respect. Resolution is good but not world class. Soundstaging, imaging and separation are acceptable to slightly above average. Despite all this, the listener is too busy listening to the beauty of the Almarro's tone to notice or care about such things. The feeling of holographically "being there" is a strength of this amp How the Almarro manages this without being a champ in imaging and soundstaging is baffling !

Asking my partner for a second opinion, she concluded that the Almarro was beautiful but somewhat emotionally draining, while the Cary was more balanced. I reckoned that this has more to the do with the high level of emotional engagement of the Almarro.


If you are the sort of listener that wants to be able to feel the emotion of a violin concerto instead of being able to discern the exact placement of all performers of the stage, bowing technique, what they had for lunch, etc, the Almarro is definitely for you. As long as used sensibly with speakers of suitable ease of drive, the Almarro is able to deliver a slice of high-end at real world prices.
16 comments:

Talk about quick shipping ! My order with Audio-Gd has been pending for quite some time now as I wanted some customised inputs done (gave up the USB input to convert to another coaxial input). It was shipped out on Saturday afternoon and arrived in Singapore at my doorstep on Monday evening.

The order process was hassle free and the unit was well packed and arrived in good shape.

The DAC19 is based on two Burr Brown PCM1704UK DAC chips paired with Audio-Gd's proprietary DSP filter. Audio-Gd's principal, Mr. He Qinghua has made an announcement that he is discontinuing his products based on the PCM1704UK due to difficulties in obtaining supply of the chip. That was enough reason for me to take the plunge.

You can refer to http://www.audio-gd.com/Pro/dac/DAC19/DAC19EN.htm for full technical details.

The DAC-19 in finished in a shoe-box sized case that is rather utilitarian. The case is decently finished and will not win any prizes for either fit or finish. Given its asking price and performance, this is acceptable to me. I can do without paying a lot more for a snazzier case that does nothing for performance. There is a little bit of free play on the front selector switch, but otherwise, the rest of the switches and jacks are functional and do the job.

It has been suggested elsewhere that the DAC-19 is not particularly sensitive to quality of transport, digital cables etc, or power cables, by reason of its powerful jitter reduction and power supply quality respectively. I believe that it is wrong to disregard those factors and use of the DAC-19 over the short time I have had it suggests that strong dividends may be reaped by paying careful attention.

Transport duties were handled by Slimdevices Squeezebox 3, linked with Oyaide's DB-510 digital cable. Out of the box, the DAC-19 sounds detailed and resolving in the midrange and high-frequencies, albeit sounding a bit bleached and light weight. Bass in particular is not deep or impactful and the overall balance is a bit dry. Things changes drastically after extended burn in, with vast differences heard past the 50 hour mark and 200 hour mark. New owners who suffer from buyer's remorse upon hearing the DAC-19 would be well served to persist in their burn-in duties and not give up !

Once well cooked, things become a bit interesting. Both the top and bottom end of the DAC-19 open up and you get tight tuneful bass, as well as extended and airy highs. What you do not get is any form of euphony or colour in its presentation.

Comparing the DAC-19 to my Lite DAC-50 was an academic lesson in extremes. First off, my Lite DAC-50 is quite extensively modded, with changes in the power supply as well as some circuit modifications in its tube output stage and coupling caps. Once modded, the Lite is rich, organic while sounding open and dynamic. It would be considered by most to be a musical sounding DAC. It also has a strong sonic signature and its richness of tone as well as its weighty and deep bass are obvious in all recordings.

The DAC-19 sounds neutral, rich or lean, depending on the recording. It seems truer to the recording than most, and as such will not help systems that are deficient in certain areas. As such, the DAC-19 would work best in systems that are already well-tuned for a neutral  source. Paired with the Acrolink 4020-7N power cord, the DAC-19 sounded a bit bright and thin. Changing the power cord to Acrolink's factory terminated 4030 power cord fixed this..

Similarly, a bit of tuning was needed in respect of the footers supporting the DAC-19. A trio of Finite Element's Ceraballs made the sound too forward. Replacing that with Golden Sound's DH cones struck the best balance between cleaning up the sound and adding some weight to the presentation of the DAC-19.

Describing the DAC-19's sound is more difficult than most equipment, because it does not seem to have any intrinsic sonic signature of its own.However, after extended listening, the one striking quality of the DAC-19 is its ability to resolve and present instruments and voices in the most complex of mixes in a coherent, well placed and separated manner. The Lite DAC has a tendency to spotlight the main vocals and principal accompanying instrument, with the other instruments relatively obscured. The DAC-19 resolves both well, with a surprising amount of low level detail that is not immediately apparent on other equipment.

For it's asking price, resolution of this nature is class leading. I am quite sure that a DAC of this quality with a Western manufacturer badge and snazzier case could easy cost 3 times as much as the Audio-Gd. If you are looking for a DAC that digs deep into your recordings and presents a true picture of what's there, you would be well advised to check out the DAC-19. 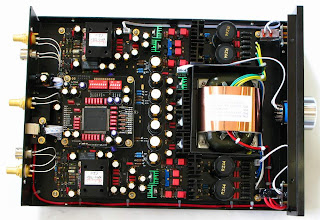 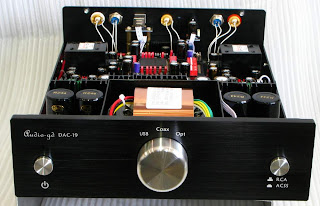 My Audio-Gd recently started losing sound in one channel (December 2013) after 3 years of ownership. I loaned the unit to a friend and he was getting intermittent drop-outs that were almost impossible to recreate.

When I received the unit back, one channel was totally dead. I popped the hood and reseated the DSP board, and it works perfectly now. My guess is that despite being tightly screwed down, the pin connectors may develop contact issues over time. The movement during transport certainly didn't help. Worth a shot if you having problems with your unit.
13 comments: