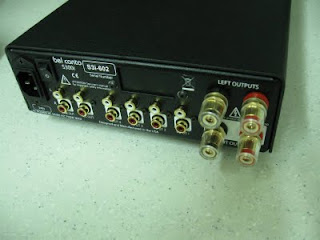 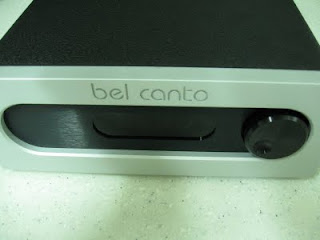 The Bel Canto S-300i is a handsome piece of hear. Sporting arguably the thickest aluminum fascia I've ever seen, the fit and finish is absolutely stunning. From the tactile feel of its microprocessor controlled control knob, to the WBT binding speaker binding posts, everything feels perfectly balanced.

For a "digital" amplifier, the Bel Canto is also suprisingly heavy, about 5 kg. Based on a 150 wpc (8 Ohm) Bang & Olufsen Icepower module, the Bel Canto will deliver up to 300 wpc into a 4 ohm load.

Well enough about the specifications, how does it sound ?

According to conventional hi-fi wisdom, "Digital" amplifiers sound dry, synthetic and lifeless. Some early "digital" amplifier designs may have done nothing to dispel that myth. However, the Bel Canto has a fairly easy going sound. Extremely tight and fast bass, a warm midrange with the right amount of weight, what more could one ask for ?

I think the weakness of the Bel Canto lies in its presentation of high frequencies. There is a certain opacity and dryness to the sound such that hi-hats and percussion instruments don't really have much sense of air or space. You can hear the initial transient of the note, but without much feel of the decay thereafter. This weakness is not immediately noticeable but is revealed upon extended listening and comparisons with the other amplifiers I had at hand.

The above criticism has to be taken in context. The Bel Canto for its power is not an expensive amplifier (OK, its not a budget amplifier either). It proved very reliable in use, never skipping a beat or giving any cause for concern. I have built two systems around this amplifier for friends, and the results have been very satisfying. However, its overall balance requires careful auditioning and matching with partnering equipment.
No comments:

An Afternoon of Tuning 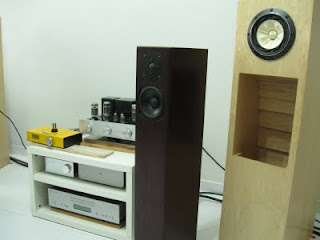 Saturday afternoon was spent over at a friend's place listening to his newly built Fostex FE168 Sigma in backloaded horn cabinets and the Diva Classic 1L preamp.

My friend has the honour of owning the very first set of the 1L preamp fresh from T.S. Lim's hands.

The Diva was paired with a modded Cayin A-50T. The Cayin does not have a direct preamp in socket, so the volume knob was either turned to maximum or about 12 o'clock (at times we felt the gain was too high with the knob at maximum). The Cayin is basically a power amp with a passive preamp stage inside a single chassis.

The modifications done to the Cayin A-50T include a change of input coupling capacitors to Jensen aluminum paper-in-oil capacitors. The other coupling caps downstream were changed to Sonic Cap MkI and the feedback caps changed to Solen. The grid stopper resistor has also been changed to Japanese Kiwame resistors.

The 1L has a beautiful yellow faceplate and uses an outboard solid state rectified power supply. The preamp circuit should be very simple (we didn't open it up) since there is only a single 6SN7 tube.

The Fostex was still running in, and we felt that although the tonal balance is quite nice, there was no bass, and very limited high frequency extension. Midrange definition also lacked some texture. Probably more extended run in would be needed before final conclusions could be made.

The full range driver strengths in terms of dynamics and coherence were all there, just that the lack of frequency extremes (this Fostex driver has no whizzer cone BTW and has an intriguing flower like pattern on its cone) and slight shoutiness made the sound a bit uneven.

First up, we rolled some of the tubes. The first to go were the small tubes in the Cayin. The 12AX7 and 12AU7 used there were JJ 12AX7/ECC803 and stock Cayin 12AU7 (almost certainly Shuguang). The 12AX7 tubes were replaced with RCA 5751 double mica blackplates and the 12AU7 replaced with RCA cleartops.

Flick the switch and hummmmmmmmm. Oops. Turned out the 5751 tubes were being a bit naughty. So, the JJs went back in. Wow, what a world of difference just with the change of 12AU7 tubes. Midrange was much more defined and the overall feel was more lifelike, focused and textured.

Other adjustments done included replacing the EL34 tubes of the Cayin with EH6CA7 tubes, and the stock EH 6SN7 in the Classic 1L which was replaced with a RCA GTB blackplate. Speakers were moved out a bit and toed in almost directly to the listener.

Ah... so much better now, although we both agreed that the very creamy and rich sound of the RCA 6SN7 GTB may be a bit too slow and warm for some.

My friend suggested we try the setup with another pair of speakers, Totem Sttaffs. Turned out to be the best sound of the day, but only with judicious repositioning of the speakers in the room.

The speakers were brought out far into the room and with slight toe in aiming to a point behind the listener position.

The bass was still slightly uncontrolled and a pair of socks had to be sacrificed to block the rear-firing ports of the cabinet.

Actually we had both written off the Totem Sttaffs before this point as my friend had quite a lot of problems with the Totem that sounded very dark with soundstaging and imaging problems. But he is now keen of keeping the Totem and fine tuning it to get the best sound possible.

It was a very fun two hours and we both learnt quite a fair bit. The tube rolling was quite a shock for both of us. Although I have always been a proponent of NOS preamp tubes, this is the first time I have heard such a day and night difference with just a single tube roll.

It will be interesting to see how the Fostex turns out after another 50 to 100 hours of run in.
No comments: