The Invicta was the first product launched by Resonessence Labs, a company founded by Mark Mallinson, former operations director of ESS Technology. Many members of his team are people that worked on the Sabre DAC project at ESS. Let's see what tricks they have up their sleeve to maximise the performance of the Sabre DAC chip.

Fast forward a few years later, and the Invicta remains as Resonessence's flagship product, although it is available in two flavours now. The Invicta has a headphone stage, while it's sister product, the Mirus omits this, but instead deploys the DAC chip formerly dedicated to the headphone stage to be used together with the main DAC chip. This improves THD and noise measurements compared to the Invicta.

The Invicta is a compact, half-sized component. Pictures do not convey how solidly built this machine is. Measuring just 22 cm wide, 28.2 cm deep, and 5 cm high, the Invicta weighs 2.9 kg. The front plate, base and control knob are milled from solid aluminum. It's looks may not appeal to all, although personally I find it allright, perhaps a touch industrial, but certainly no need to hide this in the basement.

User preset options including start-up input and level, whether the output is muted when headphones are used, setting independent trim levels for the two headphone outputs, etc. Apart from that, phase can be inverted for each channel independently, brightness of the indicators and screen individually set, etc. This is not a comprehensive description, so you may want to refer to the user manual which can be downloaded from Resonessence's web-site. Whew - that is certainly a lot of options !

Laid out on the front panel of the Invicta from left to right are, the two headphone outputs (6.3 mm), the OLED display with four lozenge shaped menu and navigation buttons underneath, sampling rate indicators (including DSD playback), an SD card slot, and the control wheel. 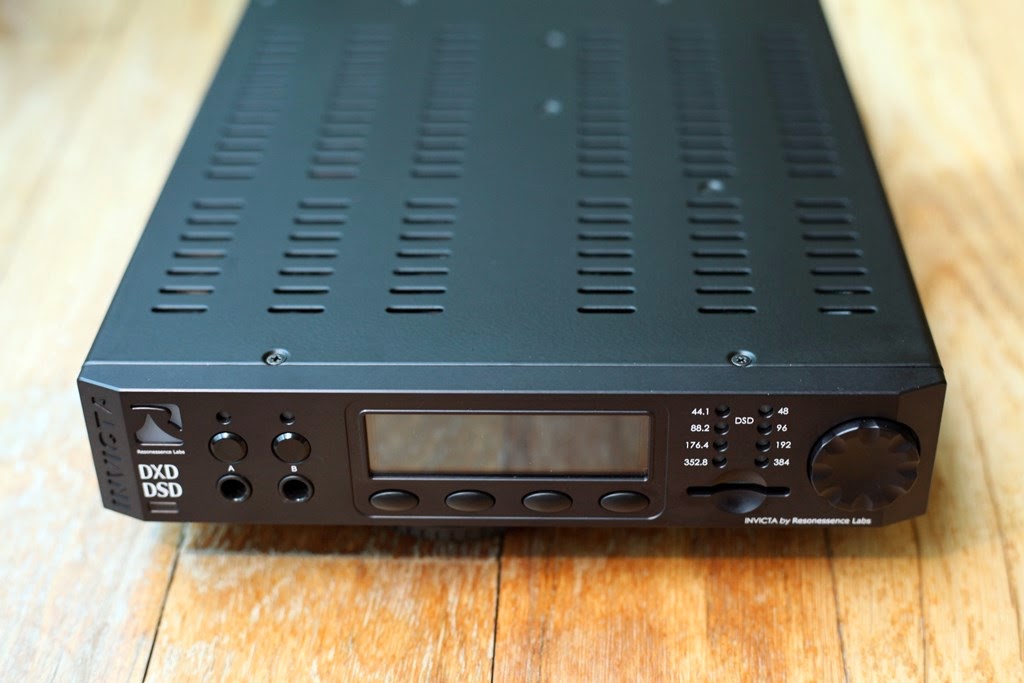 On the rear panel from left to right are, analog output (both balanced and single ended) and five digital inputs (AES/EBU, Toslink optical, two BNC inputs and asynchronous USB 2.0). A single digital output via Toslink optical is provided. Of interest is an HDMI port, which is used to display a navigation menu, track information and album art to a TV or monitor. A power switch is also located next to the IEC inlet. 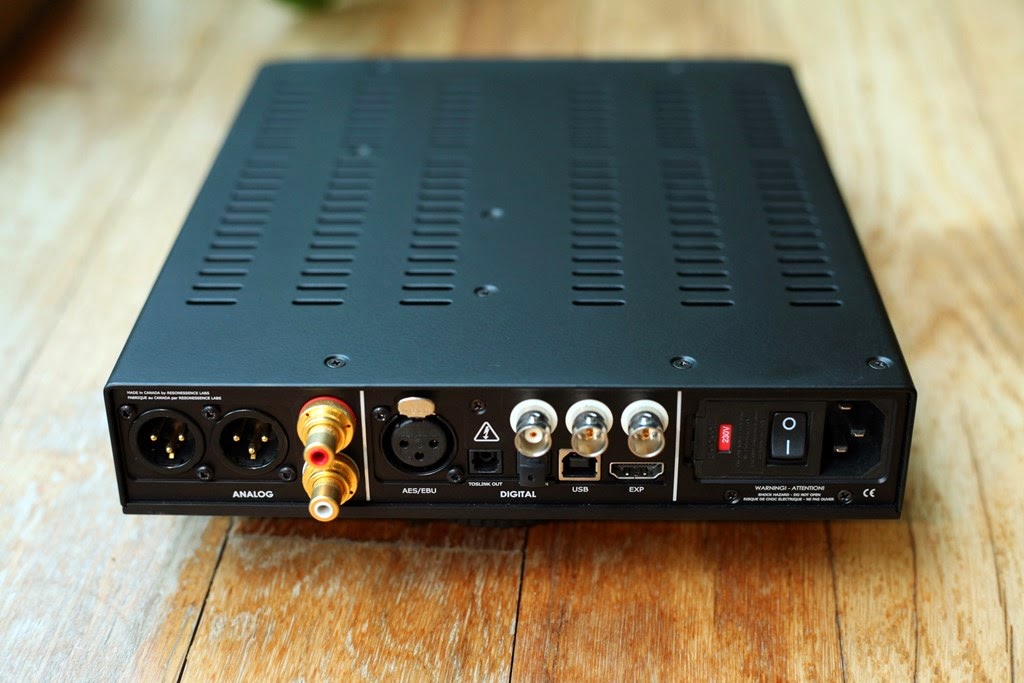 Despite the compact size of the Invicta, the RCA sockets were widely spaced enough for me to use my usual Acrolink interconnects which have larger than usual plugs.

Internally (viewed from photos on Resonessence's website), the Invicta is powered by a single toroidal transformer. Two ESS Sabre 9018 DAC chips are used, one dedicated to the headphone outputs, and another to the conventional analog section. The Mirus as explained in the introduction uses the second 9018 DAC chip in the analog output section since the headphone section is omitted.

The headphone amp operates in Class A and is quite powerful. It is capable of swinging 5.1 V at full output and is a low output impedance design (1 ohm). Peak current delivery for a 50 ohm load is 280 mw.

Volume control is implemented digitally and can be controlled in 0.5 db steps. Resonessence explains in detail on its website why digital volume control was chosen despite the general audiophile's lack of love for it. The 32 bit volume control is claimed to preserve dynamic range and resolution for attenuation levels up to -48 db for 24 bit program information.

The digital filters (two standard filters from ESS and five custom filters from Resonessence) can be switched on the fly by pressing one of the lozenge shaped buttons. None of the buttons are labelled, so you will need to refer to the manual the first few times you use the unit. After a while, navigation become second nature.

Operation was generally fuss-free (including playback from SD card) except that when switching from the USB input to another input, you will generally lose your USB connection until you close your music player software and restart it.

The video output is quite useful and eases navigation. This is especially useful as the Invicta's display is quite small and track information is not easily read if you are sitting more than 2 meters in distance from the unit. 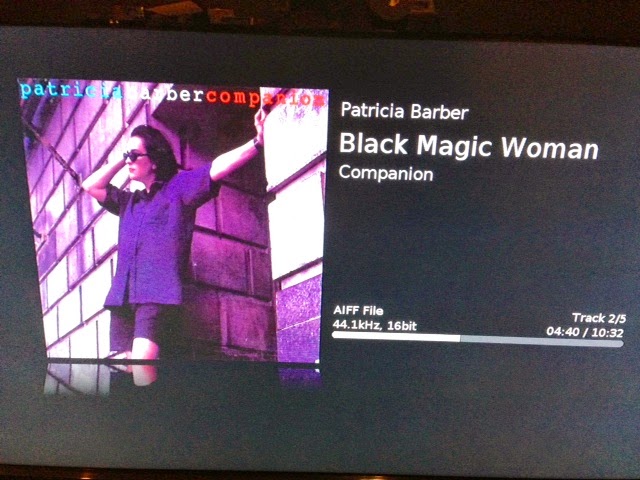 The unit is slightly warm to the touch in standby mode, and runs very warm after being left switched on for a few hours. Probably best to leave it in standby mode when you are not listening.

Switching through the digital filters yields quite a good degree of tuning to get the Invicta to suit your system. My three favourite filters were (i) Sabre fast roll-off, (ii) Linear IIR, (iii) Linear phase - apodizing.

Putting the Invicta through its paces, you are left with the sense of a musical performer that is always well behaved and utterly grain free. Listener fatigue is well kept at bay, and the Invicta soars with great recordings while whipping lesser ones into submission.

Bass has good extension, control and articulation. The Invicta has a bloomier and warmer mid-bass presentation in comparison to the Calyx Femto DAC that is drier but more impactful. This gives the Invicta a warmer feel, and a "bigger" sound.

Vocals have a warm and smooth balance. The effect is not overdone, and voices have a bit more weight and image size to them. Rebecca Pidgeon and Eva Cassidy sound less sibilant than usual, but there is also less texturing and detail in vocal inflexions. This effect is quite apparent for string instruments like the violin which have a sweeter sound and less bite than usual.

High frequency extension is very good, with a good deal of sparkle and air to the ring of ride cymbals and the like. As expected, this helps a great deal in retrieval of acoustic space in the recording venue.

Soundstage width and height are good, although depth perception is slightly less deep compared to the Calyx Femto. The Invicta places the soundstage slightly closer than the Femto, and gives a more intimate feel to the look-through into the recording space.

While detail retrieval is very good, it is presented in a more "big-picture" manner. Both instruments and vocals are subtly more prominent in the mix, with a degree of projection and presence. The leading edge of transients have a bit more snap and energy compared to the Femto which is more laidback but with finer and more delicate microdetail.

For head-fi users, the headphone amplifier section is of high quality and good enough to replace any budget to mid-end headphone amp. Well, it certainly blew the headphone stage of my Antelope Zodiac Gold out of the water. It generally had no issues with driving the headphones I had on hand, a Beyer DT-880 (250 ohm version), Audeze LCD 2.1, and an Audio Technica ATH-W5000.

The LCD 2.1 reached ear splitting volumes at -30db levels, so no need to worry about running out of voltage. That being said, the LCD 2 does sound more effortless with the Schitt Lyr, and I would suggest pairing the Invicta with easier to drive headphone loads. As the balanced output function uses non standard wiring (dual 6.3 mm jacks), I was unable to try them out.

I also hooked up the Invicta directly to my Conrad Johnson Classic 60 SE power amp. It was not as fluid or tonally dense as I would have liked, but was more than acceptable. I certainly didn't hear any loss of resolution, and using the Invicta in this manner is certainly a viable option.

The Invicta is the Swiss Army knife of DACs -  supremely flexible and customisable, as well as future proofed.

Apart from its high level of performance, two particular features stood out for me - the SD card option, and the headphone stage.

The SD card capability is a perfect introduction to the world of computer music. It sounds good, and is the easiest and most non-intimidating way of playing DSD files that I know. Configuring DSD playback in either Foobar or Pure Music is not exactly plug-and-play, with the Foobar setup being particularly intimidating for the average audiophile.

I was heartened by the quality of the headphone stage. The B.M.C. PureDAC that was reviewed recently also impressed, but only through its balanced outputs. The Invicta was good enough to offer a serious option of eschewing a separate headphone amplifier totally.

The price tag of the Invicta is very reasonable for its capabilities and performance - USD 4,995. It would be wise for any audiophile in this price range to include the Invicta on his or her audition list.

The Invicta is available in Singapore from Horizon Acoustics, #03-15, Beauty World Centre.

A word of thanks to K.M. Poon, principal of Horizon Acoustics for supplying the review unit.

I happened to drop by Audio Basic Singapore (local dealer for Telos) recently. Another customer walked in and Steven Cheah, manager and principal of Audio Basic asked him to listen to a demonstration of the Telos Quantum Noise Resonator ("QNR").

The QNR is a compact device about the size of a paperback novel. It is quite heavy, being made out of machined aircraft grade aluminum. The chassis has no visible screws, and a top cover acrylic window allows the user to see the circuit board, and a LED display that blinks meaningfully when the QNR is in operation. 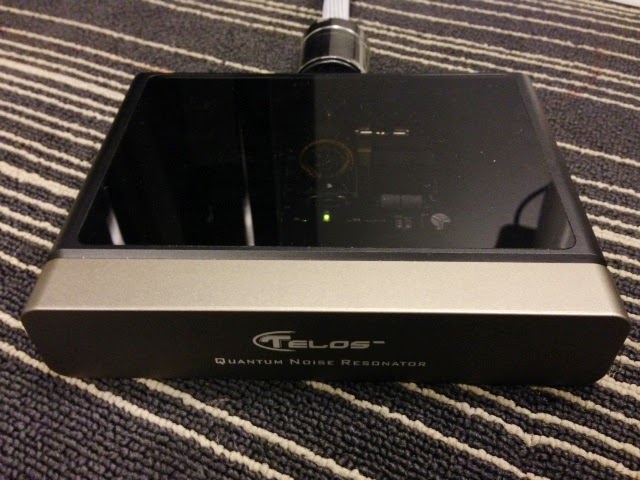 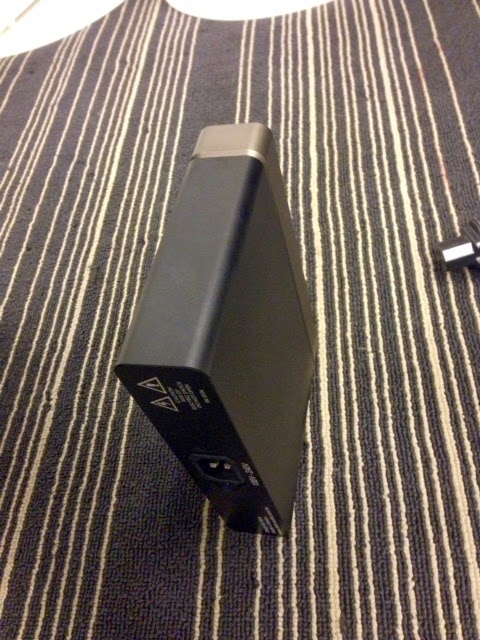 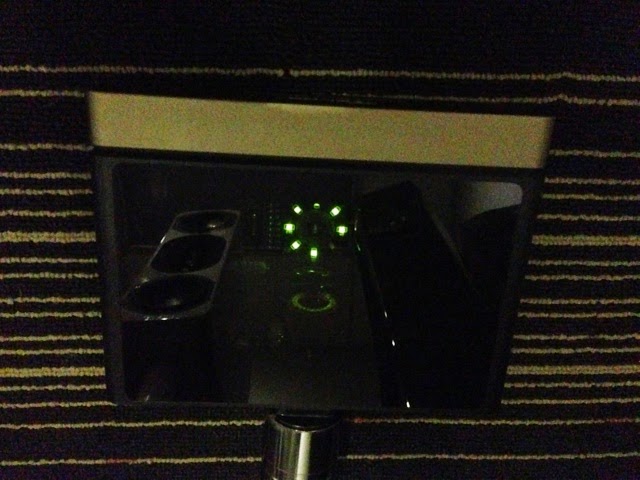 As the QNR is connected in parallel with your equipment, there is no current limitation unlike series type of line conditioners.

The QNR is equipped with an IEC socket on its rear panel, which allows experimentation with different power cords.

I happened to stay long enough to listen to a demonstation to two different customers. In both cases, hooking up the QNR resulted in an increase in spaciousness of the sound, and improvement in three dimensionality of the soundstage. Separation and focus was better too. I also felt that with the QNR,
the leading edge of musical instruments was bolder and more energetic, with an improvement in decay too.

The effect is quite obvious, and I may be borrowing a unit for home evaluation. Stay tuned.