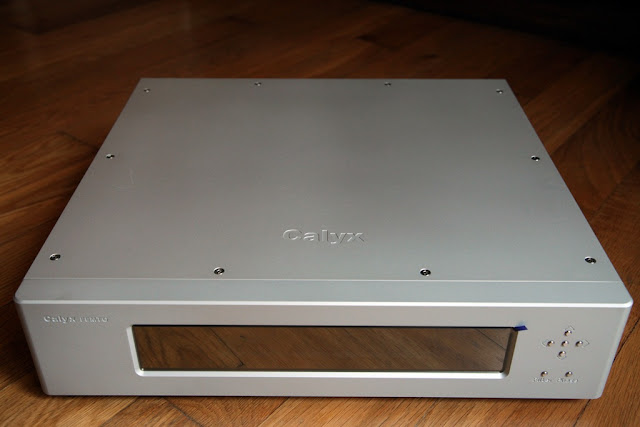 The Calyx Femto is the latest DAC from Digital & Analogue, the wonderful Korean company that brought us the 24/192 DAC and the Coffee DAC and headamp.

I loved my 24/192 DAC, but wished it had more inputs. The Femto is obviously the answer to that and much more. Based on the ESS Sabre 9018 DAC chip, the Femto is a full sized component  with all the inputs that you could ask for.

At a price multiple of the 24/192, the Femto has to deliver much more to earn its share of the Audiophile wallet.

The Femto is a massively chunky and heavy unit. You need to personally lift it to feel its 18.5 kg weight and massive solid aluminum panels. Somehow, pictures do not convey the true size of the unit - it is much bigger than it looks. Measure your rack space carefully before purchasing !

Of particular interest are its feet, which are lined with cork, and its power button, which is discreetly located on the left hand side of the unit. I seldom switch off my digital equipment, and relocating the power button from the front panel leaves the fascia of the Femto looking clean, sleek and uncluttered. 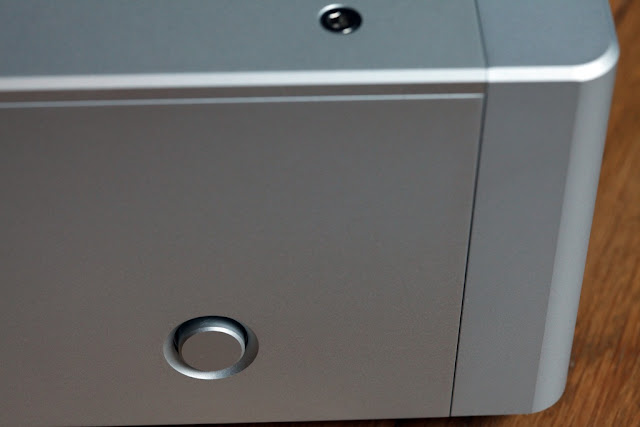 The Femto is beautiful, elegant and sophisticated in a very understated way. With matching beauty and brains, my Femto would be ideal marriage material if she were human (I’ve decided my Femto is female).

Lest I forget, the matching remote control is also finished from solid aluminum, and has sufficient weight to cause serious damage to intruders. I wonder sometimes whether Calyx has some secret deal with an aluminium mining company and/or a CNC factory, because they are certainly liberal in their use of material.

As suggested by its name, the Femto’s main feature is its super accurate clock that has its accuracy measured in femtoseconds. A femtosecond is one quadrillionth, or one millionth of one billionth of a second. Mathematics was never my forte, so I will leave you to ponder exactly how miniscule that is.

Instead of a single Sabre 9018 chip as used in the 24/192, the Femto uses twin 9018 chips. The Femto also gains two onboard linear power supplies that separately power the digital and analogue sections of the Femto. In comparison, the 24/192 relies on either the 5V supply from the source’s USB bus (never a good idea!), or a switched mode wall wart. Calyx must have realised that, since the 24/192 now ships with an in-house designed linear power supply as standard.

The Femto has enough digital inputs to cater for almost every need. Twin inputs are provided for coaxial ,optical and AES/EBU, while a sole BNC input is also provided. Computer audiophiles are taken care off by a single USB input which accepts signals up to 24/192 resolution and sampling rate. 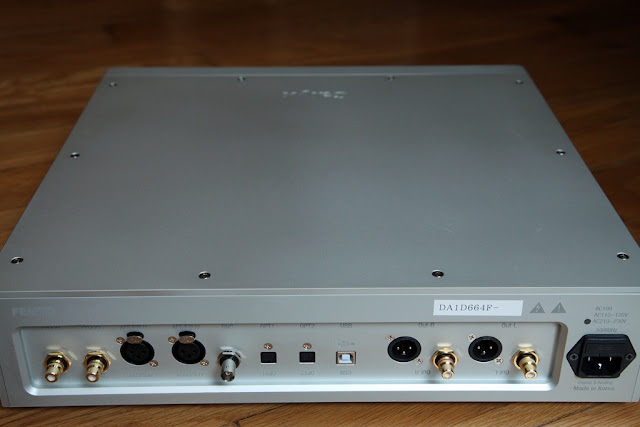 The front panel buttons manipulate a digital volume control, phase inversion and digital filter settings (which actually sets the low pass filter at 50, 60 or 70 kHz - 50 kHz was used throughout my listening sessions).

On the output side, both single ended and balanced outputs are provided.

The front display thoughtfully displays all relevant information, such as the input selected, sampling rate (a very important and often overlooked function), volume and polarity. 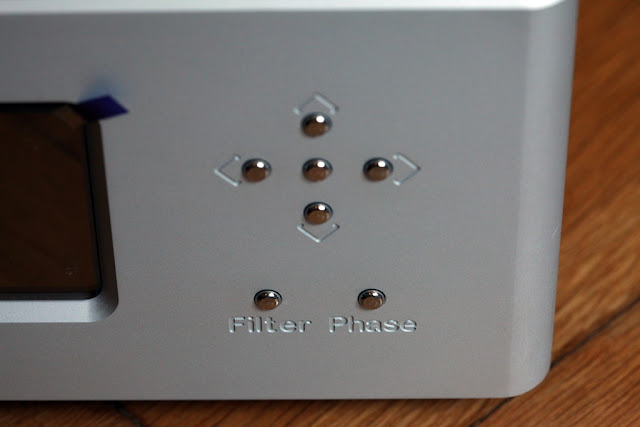 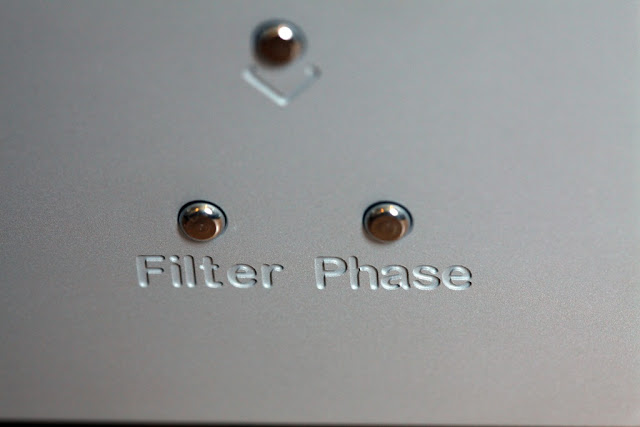 Unboxing the Femto was a pleasure. The double boxed packaging and accompanying foam lining are sturdy enough to withstand serious punishment and can be re-used a number of times without too much issue.

The manual is a bit sparse though, with no explanation of the digital filter settings, as well as obvious errors, such as reference to installing drivers on the supplied CD-ROM (which could not be found after some frantic searching). In any event, Mac users do not need to install any.

The Femto needs plenty of run-in. Out of the box, it sounded decent enough, although a bit lacking in bass authority. On the top end, it also sounded a bit dry.

After about 100 hours under its belt, the Femto was put through its paces. Both its USB and BNC inputs were used, with the computer audio source being a 2011 Mac Mini (with 8 GB of RAM) running Pure Music 1.84. Traditional disc spinning duties were tasked to my Cary CD-500. The Cary’s upsampling feature is sent through its digital output, so this feature was disabled to eliminate unnecessary variables.

I noticed that the 24/192 truly shines through its USB input, with its coaxial input a distant second. In respect of the Femto, this is still the case, although the gap in performance is less. No need to make excuses for SPDIF performance here.

Coming from the 24/192, the differences are immediately discernible. After extended listening, and time for the brain and ears to become comfortable and process the information, it is obvious that the Femto is not a case of a DAC cut from the same cloth of its sibling, but is altogether a different animal.

The first thing that grabs you is the precision of soundstage, and the acoustic reverberation surrounding each instrument and voice. The depth and height of the soundstage are exceptional. The Femto excels in both microdetail and dynamics. Its focus and grip are never lost, and the finest touches are clearly discernible even during busy mixes.

The tonal balance of the Femto would be best described as slightly sweet, with a solid bass foundation. It can also be said to be “brilliant” sounding, with a certain shine and airiness in the upper frequencies. I would not consider it to be bright, but the Femto would never be described as dull sounding ! Subjectively, the Femto gives the impression of having no constraints at either end of the frequency spectrum, with an open and unforced quality.


Low frequencies are well controlled and extended. In terms of slam, the Femto shows you its pedigree compared to the 24/192 with more authority, bloom and warmth in the bass.

In conveying the human voice, the Femto continues in the family mould, with both detail and the right amount of sweetness and warmth.

In my system, the high frequencies were incredibly extended, and the combination with the inverted beryllium dome tweeter in my Focal speakers were clean and free from strain and harshness.

I believe that any further comparisons between the 24/192 and the Femto would be meaningless. The 24/192 should not be treated as a Femto-lite at a lower price. Both units are in totally different classes, and a side-by-side audition should not be made between the two, unless you are willing to commit to the budget required for the Femto.

The Femto, despite its sheer amount of micro detail, cleverly sounds natural at all times and is fatigue free. I felt that it was able to put recordings in their best light, and not be constrained by the quality of the recording. That being said, it is by no means veiled – give it a well recorded high resolution file, and it simply shines !

I like to listen to jazz , classical music and vocal works. The Femto is especially suited for my music taste. Two artists that I am particular fond of, are Patricia Barber and the late Eva Cassidy.

Patricia Barber's performance of Santana's Black Magic Woman (from her album - Companion) is electrifying and hair raising. The intricacy of the drum and electric guitar work, especially the solo parts are laid out with great transparency and energy. Eva Cassidy's recording of her live performance at the Blues Alley is one of my favourite albums and never fails to move me emotionally.I am happy to report that the Femto sounds incredible with both, from a technical and artistic viewpoint.

As clichéd as it may sound, the Femto allowed me to rediscover my music collection. Simply put, the Femto makes recordings sound real and lifelike. The immediately emotional response is not about the usual hi-fi superlatives, but more the feeling of being at the recording venue, immersed in the music.

I was somewhat apprehensive that the move from the 24/192 to the Femto would bring only marginal improvements. After all, we are all familiar with the law of diminishing returns – and the 24/192 already brings so much to the table. A short session at the dealer with a side-by-side comparison was sufficient for me to take the plunge.

It was a pleasant surprise, that the Femto would bring such a substantial improvement to my system. I would generally be hesitant to describe a product of this price as a bargain, but the Femto truly is one.

So far, in my hi-fi journey, I’ve had two breakthrough moments.

The first was my acquisition of my Focal Micro Utopia Be – it changed my idea of the limits of dynamic driver performance, especially in respect of its tweeter performance.

The second was the basic room treatment done to my listening room – it made me realize the strong influence of the room, and its importance relative to the equipment sitting in the rack.

You may put down the Femto as my third  – an elevation of source quality to unimagined heights.

I cannot speak of how the Femto compares to other high-end players in the digital space, but do check out the Femto if you are looking in that price range. 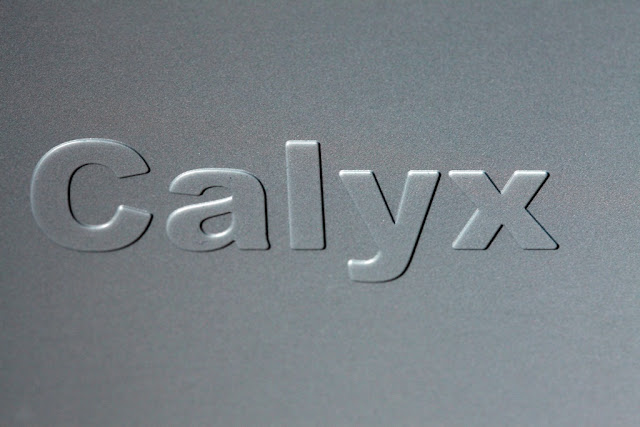