Thanks to the popularity of head-fi, there has been a proliferation of portable products on the market, such as USB powered DACs, combined DAC / headamps and the like.

Head-fi does have a lot of advantages over conventional setups. The overall cost of ownership is more affordable - spending two or three thousand dollars could get you close to cutting edge performance. Further, head-fi is perfect for rigs in land scarce Singapore.

Resonessence Labs was founded by Mark Mallinson, former operations director for ESS Technology. His team members include former ESS employees with intimate knowledge of DAC and ADC design. It would be sensible to assume that these guys know more than a trick or two in handling ESS DACs.

The Herus is a tiny USB powered DAC / headamp based on the ESS 9010-2M chip. Measuring just 6.35 cm long, 3.17 cm wide and 1.9 cm high, it could slip easily into a laptop case for your long and lonely business trips. 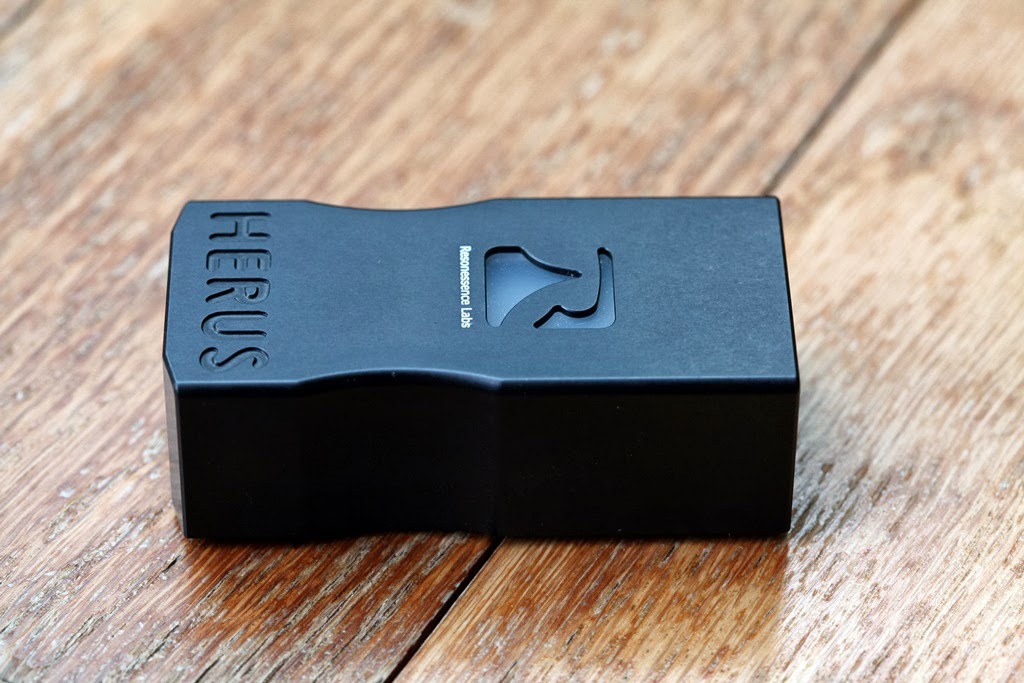 A USB Type B socket is located on one end, while the opposite end has a 1/4 inch headphone jack. The Resonessence Lab's logo is placed on the top surface, and glows blue to indicate that power is being received. The logo flashes red prior to lock, and again when there is a sampling rate change. 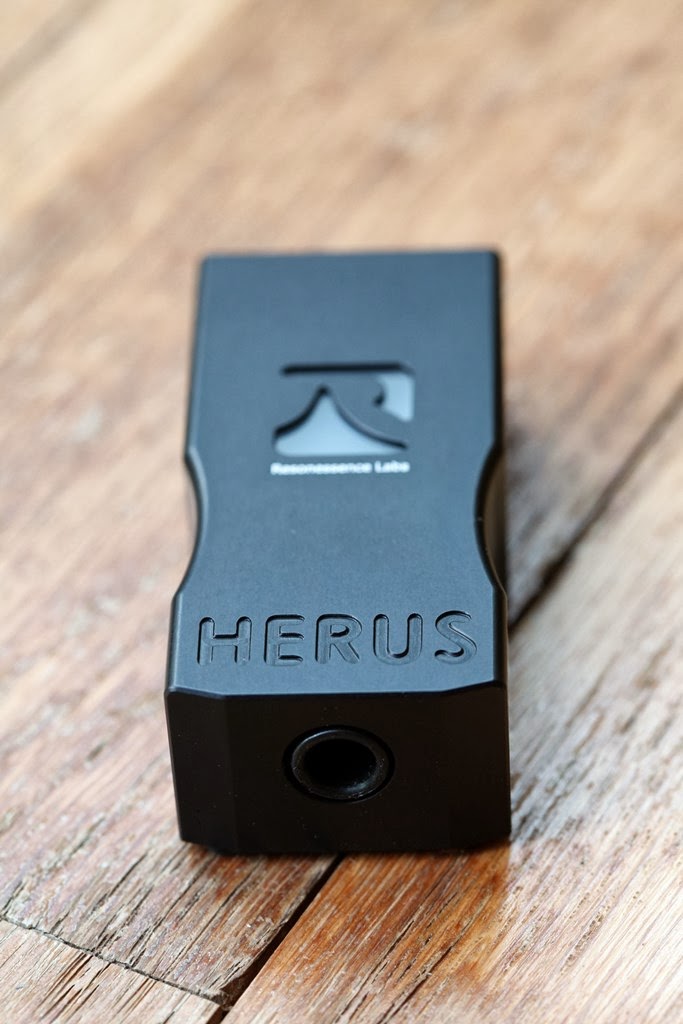 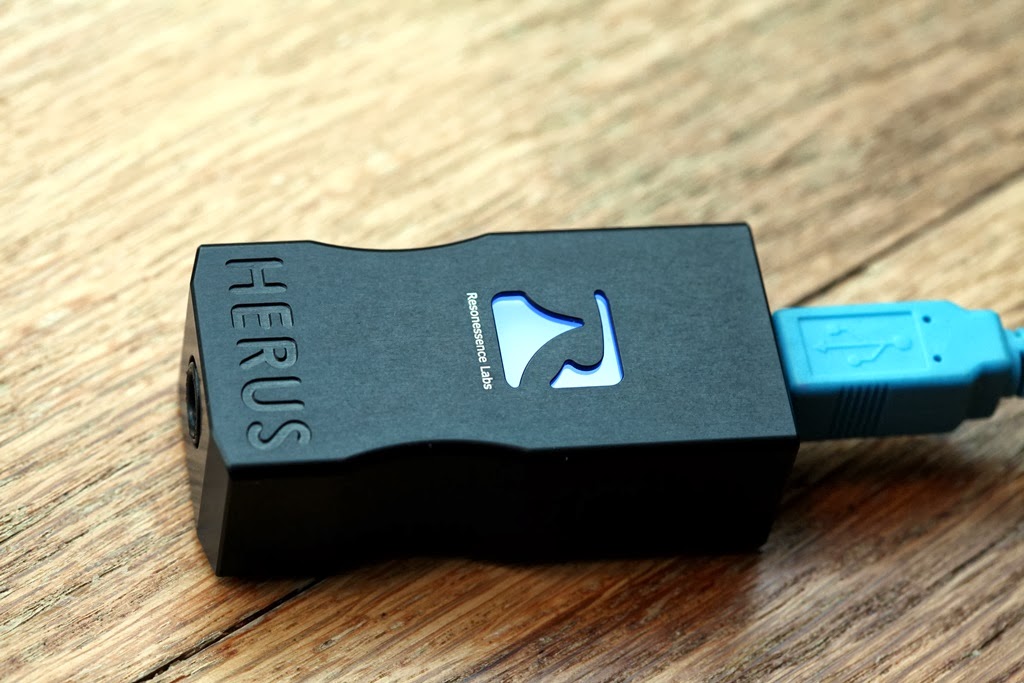 Build quality is excellent - the Herus is machined from solid aluminum. The base of the unit sports a rather clever thin rubber rectangle to prevent the Herus from sliding off, or marring the surface it rests on.

There are no physical volume controls anywhere on the Herus - this is directly set on your computer instead.

The Herus is also capable of driving power amps directly, although you will need a customised cable, or 1/4 inch plug to stereo RCA female socket adapter to use your normal RCA interconnects.

Based on it's rated output, the Herus should be able to drive most headphones and IEMs on the market. However, orthodynamic users will need to look elsewhere as the power output is unlikely to be ideal.

Setting up the Herus was easy and glitch-free. PC users will need to download USB 2.0 drivers (written by Thesycon) from Resonessence's website. Mac users can skip driver installation and use the Herus out of the box. I tried installing the Herus on both my PC Desktop and my Macbook Pro. Both installations were fuss-free. The Macbook refused to play DSD, but this was due to a specific software issue on that machine. DSD played fine on a Mac Mini that was running Pure Music, J River Media Centre and Audirvana.

Resonessence's website also warns that the Herus may reset to maximum volume if you move it from one USB port to another. I tried this on my PC, and indeed this was the case. Somehow this had me gingerly checking the volume as I switched between the Coffee and Herus for comparison purposes, although volume settings are maintained as long as you don't swap ports. I was too lily-livered to attempt to connect the Herus directly to a power amp, as an accidental reset of volume could prove disastrous.

The Herus is a very nice sounding DAC / headamp. It did not take much comparison with the Calyx Coffee sitting on my desktop to realise that the Herus was better in every way.

Compared to the rich creaminess of the Coffee (definitely au lait!), the Herus is clear and crisp sounding. I tried the Herus with a Shure SRH-840, Beyer DT-880 (250 ohm version) and an Audeze LCD 2 Rev 1. The Shure is easy to drive, while the Beyer can probably be said to be middle of the road. The Audeze is more difficult to drive (although considered to be easy to drive by orthodynamic headphone standards) , and the Herus was able to drive the Audeze to far louder levels than the Coffee.

The Herus was most comfortable with the Shure and Beyer. I half-expected the Beyer and Herus combo to be bright enough to make my teeth to fall out, but that somehow did not happen. The Audeze lacked the same effortless quality when matched with my Schitt Lyr (no surprise there given the power limitations of the Herus), so keep the pairing to more modest loads.

Bass is very tight and impactful with the Herus. It punches lower, harder and faster than the Coffee. Perfect for the listener who believes that music should have visceral impact. The bass is of the drier variety though, and lacks a bit of upper midbass bloom. To use Piano notes as an illustration, left hand notes have all the necessary attack and decay, but could do with a little bit more heft and warmth.

Coming to the midband, the Herus is a lot more open and detailed too, with voices presented with clarity and texture. As a downside, sibilance is more obvious with the Herus. There is a just hint of body here. When listening to Eva Cassidy and Rebecca Pidgeon, both ladies can sound a bit thin and harsh on some equipment. The Herus adds slight weight and tonal density that should make female vocals easy on the ear, and non fatiguing in the long run.

Treble is fast, crisp and clean. Acoustic space and the decay of instruments are rendered very convincingly, with very good retrieval of low level information. Listening to Eva Cassidy's "Live at  Blues Alley", the ambience of the recording venue and the sound from the audience comes across clearly.

I went through my music collection looking for tracks to trip up the Herus, but it handled everything I threw at it with aplomb. Whether it came to gentle chamber works, or gritty rock, the Herus lapped it all up.

How about PCM vs DSD comparisons ? I only had on hand a few sample files I downloaded from 2L and Blue Coast Records. The DSD files had noticeably better attack, decay, and retrieval of low level information. Very promising indeed.

The Herus is a neutral, transparent and dynamic sounding DAC and headamp. I initially found it bright, but this is probably in contrast to the Calyx Coffee which I was using prior to this. I especially appreciated that its openness and detail came without any harshness, which helped keep listener fatigue to the minimum.

It's price tag is not the cheapest, but currently at time of writing, this is the only device that I know of in this price range which is this compact, well-finished and capable of DSD and DXD playback.

I bought the review sample.

Note : A word of thanks to K.M. Poon of Horizon Acoustics Singapore, the Singapore dealer of Resonessence for supplying the review unit.