Here are some pictures of my DIY speaker filter inspired by several threads on Audioasylum. 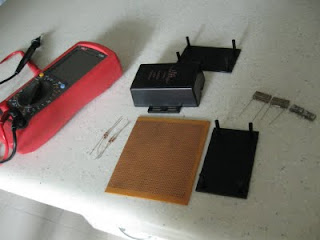 Very much like the Combak Enacom or the Walker High Definition Links, these are R-C networks or zobel networks that are applied in parallel across the speaker or the amplifer if you prefer (although they usually work better across speakers).

They will filter out ultrasonic garbage that happens to be in your system and their efficacy across the band depends on the value of capacitor and resistor that you use.

Why this project ? More out of necessity rather than vanity. The Alpha-Core Goertz speaker cables I use have much higher capacitance than average, enough to upset some amplifiers into oscillation. I thought I heard my AG1 speaker cables induce a hazy grain on the top end of my Hypex amplifier the other day. Maybe it was my imagination, but it was frightening enough to get this project up pronto. Zobel networks, besides their filtering effect also stabilises amplifiers.

Since this is a prototype project, I left this quite simple with a 10 nF and 1 nF cap, each in series with a 10 Ohm resistor.

It was really a surprise how much difference this simple device makes. There is a distinct clearing up of the sound, especially in the focus and articulation of the midrange. Vocals in particular sharpen in image size and the texture of the human voice becomes easily discernible. High frequency hash and the mess that happens when the recording mix becomes too heavy are cleaned up substantially by this.

Try it ! Its cheap, effective and really works.

After a fair amount of experimentation using terminal blocks and spare capacitors, I made a second version of the speaker filter.

First off, the choice of capacitor is critical. The typical audiophile plastic foil capacitor does not work well here. I tried using a suitable value Multicap RTX and Vishay MKP 1837 but the results were underwhelming. Please stick to parts suitable for high frequency application like suppression caps, ceramic or silvered mica caps.

Secondly, it pays to utilise the other high quality parts and techniques recommended on Audioasylum, such as solid silver wire leads, and shielding the box - they really do make a difference. I am not sure whether the resistors make much difference, but I used 1% PRP resistors as recommended.

This filter sounds even clearer and more resolving that the initial set made. Soundstaging is particularly wide, and imaging is absolutely pinpoint. Go for this version if you can.

I have had the Kingrex T-20U for a few months now and so a post about this is long overdue.

The Kingrex has been around for sometime and has garnered a reputation for being one of the best sounding of the many low powered Tripath chip powered amps out there.

The designers of Kingrex must have paid careful attention to the many tricks that the DIY community were incorporating in Tripath amps as many of these tweaks and part changes can be found in the Kingrex such as :-

The icing on top of the cake is the Burr Brown PCM-2702E DAC with USB interface. Looks like this amp is clearly targetted at the PC audio crowd and you can say is perfect for powering small speakers on a computer desktop.

The T-20U is based on the Tripath TA-2020 chip which is capable of about 10-20 watts per channel into 4 Ohms (power varies depending on measured distortion level).

Rather than try to make this a detailed analysis of the circuit design and features of the T-20U, you would be better served to refer to the 6moons review on the T-20U at www.6moons.com/audioreviews/kingrex2/u.html

I didn't plump out for the matching linear power supply (hi-fi has a mysterious way of emptying the wallet ... so it has to wait for the time being), so any observation on the sound is based on the supplied switching power supply provided.

The Kingrex sounds like most other Tripath based amps. Quite similar in balance to my Trends TA-10.1, the Kingrex has a weighty and slightly full bass. I prefer Tripath bass compared to Icepower bass which is extremely tight and extended, to the point that I find the bass too prominent, attention grabbing and somewhat unnatural.

I don't do PC audio, so I did not have a chance to evaluate its USB input and DAC.

Keep the load easy (stick to a speaker between 4-8 Ohms and sensitivity of at least 89 db/w/m or higher) and the Kingrex represents a good value amp with clean and musical output that belies its price tag.

Comparison with my modded Trends TA-10.1 were most interesting. My Trends amp is moderately modified, with the following changes made :-

The Trends was clearly better in every aspect and was also much cheaper to start off with. Sound was clearer and more coherent with low level resolution superior to the Kingrex.

I don't think this means that the Kingrex is a bad buy. However, it indicates that a stock standard T-amp (check out the many cheap T-amps on ebay nowadays) is capable of performing just as well, or even better than the Kingrex with some judicious modding.

The Kingrex is therefore suitable for the audiophile who does not have the desire or ability to mod the unit, or one who attaches a premium to the professional finished look of the Kingrex.
No comments:

For all you Diva Audio M7 users out there, T.S. Lim has just revised his flagship M7 preamp. 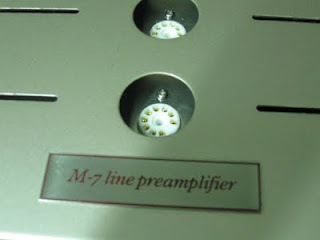 The first stage involves new voltage supply filtering on both the B+ and the heater, combined with star ground wiring arrangement.

The second stage is a rewiring of the tube arrangement to allow easier tube rolling, and the installation of a new internal bracket that allows higher quality smoothing capacitors to be installed.

More on the tube rolling - previously the tube stages in the M7 are arranged as follows, the bottom tube uses one triode (the 12ax7 is a dual triode) as first stage, and the other triode as the second stage of the left channel. The top tube is identical and is used for the right channel. This then passes through the third stage in the middle tube (one triode for each channel). This means that you can only roll two different type of tubes at the most since the first and second stage use the same tube. 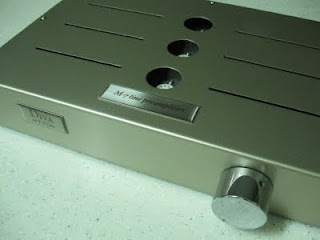 The M7 is now wired with each stage using one triode in the tube, i.e. the bottom tube is the first stage, the middle tube is the second stage and the top tube is the third stage. Now you can roll tubes to your heart's content.

Anyway, enough talk about the technicals. How does it sound ? I only managed to put in an hour of listening before sleeping but here are my initial thoughts on the latest incarnation of the M7 :-

1. Resolution - There is a noticeable increase in low level resolution and background "blackness". For example, on guitar notes, you can hear more of the body resonance of the guitar instead of just the plucked strings. Even in loud and complex passages, the increased level of detail is obvious.

2. Bass - Bass is substantial with more depth and extension.

4. Dynamics - The dynamic contrast between the loudest and softest passages is increased. Interestingly even at very high volumes, the dynamics are realistic and never fatiguing.

Note that my M7 uses a vintage military choke and NOS silver plated internal wiring. The volume pot is the standard Alps blue model though.

Oh yes, most importantly, T.S. Lim is offering this upgrade to existing M7 users for S$ 700. If you have already done the voltage filter and star ground, then the cost is S$300.

If you take this as an unreserved recommendation to upgrade your M7, you are not wrong. I highly recommend this upgrade. In current times when sought after NOS 12AX7 has reached silly money levels, this is money well spent.
No comments: