International Sound and Sight Exhibition is on right now ! The show is on between 22nd - 24th November 2019 at Holiday Inn Singapore, Orchard City Centre. The address is 11 Cavenagh Road, Singapore 229616. The closest MRT station is Somerset Station.

I am very happy that the organisers of ISSE have chosen to bring back live performances to ISSE. There are also a series of technical talks by leading technical experts, including Rob Watts of Chord, and Roland Hoffman of Dynaudio.


Simplicity Control had a number of interesting products on display, including speakers from ESD, electronics from Keces and a turntable from J. Sikora. When I dropped by, the Panda + speakers from ESD were playing, powered by a Soulution amplifier.

The Panda + is an intriguing design with field coil drivers, and a massive 3 inch Beryllium tweeter (that's not a typo). This stand-mounted speaker tips the scales at 275 kg - better call your strongest gym mates to help you position this speaker. I was invited to touch the speaker - the enclosure is inert with no vibrations felt, and surprisingly warm due to the field coil supply. Drive units are designed in-house and the first-order crossover is set at 1.5 KHz. The price of these speakers is $28,800 - a real surprise given the build quality and design of the speaker. 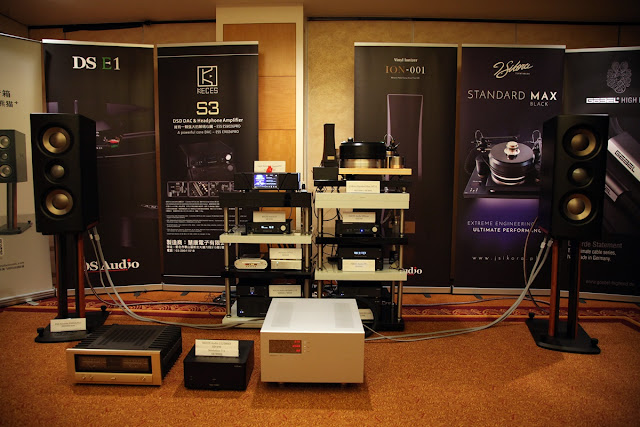 High End Research really surprised me this year. This must have been the smallest room they have exhibited in recent years, with easily the largest Wilson ever. That should be a recipe for disaster. Instead, this setup performed very well - a personal best for High End Research. The Wilson Chronosonic XVX retails for USD 329,000 which in Singapore dollar terms is enough to get your a decent sized public housing flat. These were in turn controlled by twin 80s era mini computers (actually Goldmund monoblock power amplifiers). 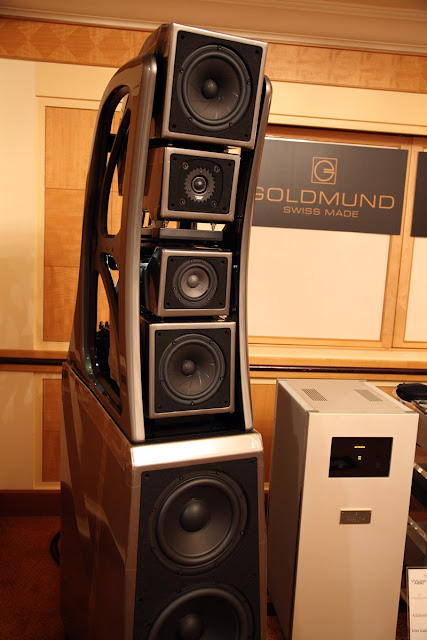 The Vimberg system was not being played while I was there. Vimberg is the second line of Tidal, for commoners that do not have bank accounts flush with cash. 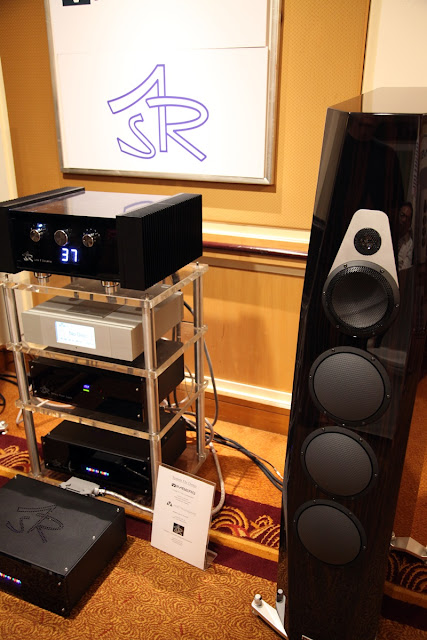 Audioline always showcases equipment that I can only dream of owing, and this year was no exception. The Tannoy Canterbury GR is quite efficient at 96 db sensitivity and should go plenty loud with a precious few watts from the Accuphase lovely twins - wrong ! Instead, they were being played with ferocious power and dynamics. I caught the digital meters on the Accuphase hitting more than 40 watts on peaks. This was a very "live" sounding setup, with appropriate scale and presence. 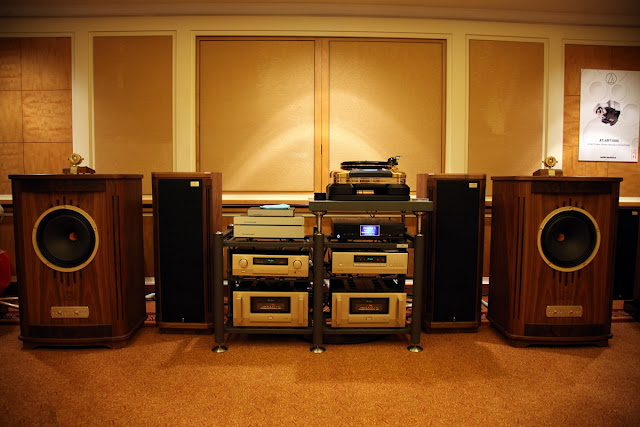 Audiophiles are an indecisive lot - they want the best of everything, and the worst of nothing. The Acoustic Signature turntable pictured below has you covered. I'm a monogamous analog person, but I can imagine the appeal of this deck to some. 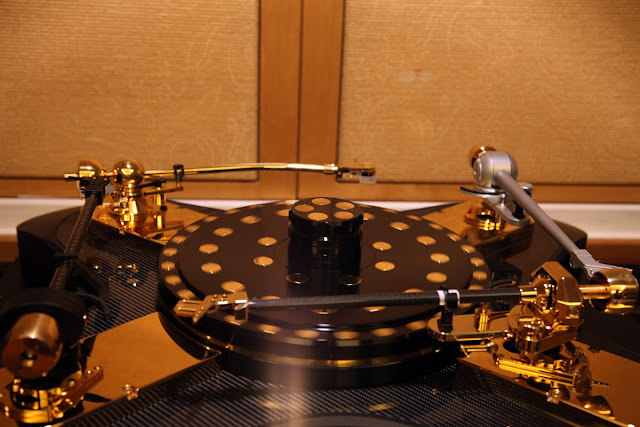 The Kronzilla has the largest tubes I've ever seen. This is perfect for the audiophile who believes that size is everything. The T1610 power tubes used can deliver more than 30 watts per channel - no simple feat for a single ended tube amplifier. 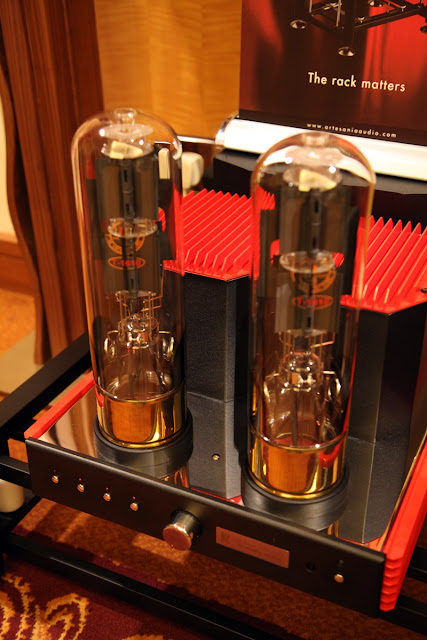 I have always had a soft spot for equipment from boutique manufacturers, especially gear from Japan. You just have to love equipment from Shindo. Naming your equipment after wine gets additional marks from me. 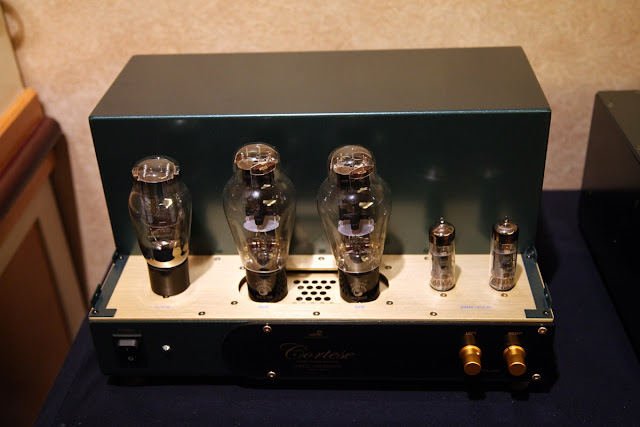 AV One had Dynaudio speakers on display. Sadly, I had to miss the talk by both Rob Watts and Roland Hoffman due to time constraints. 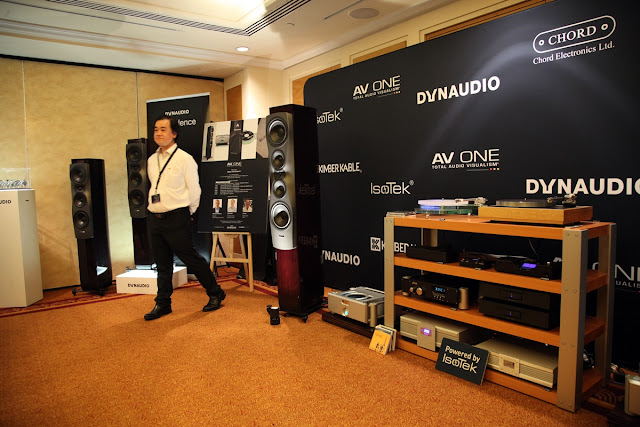 Audiomis had two different active speakers and some electronics on display. The speakers sounded very good and very friendly show pricing of S$ 369 and S$ 569 per pair of the HP3 and HP5 respectively. 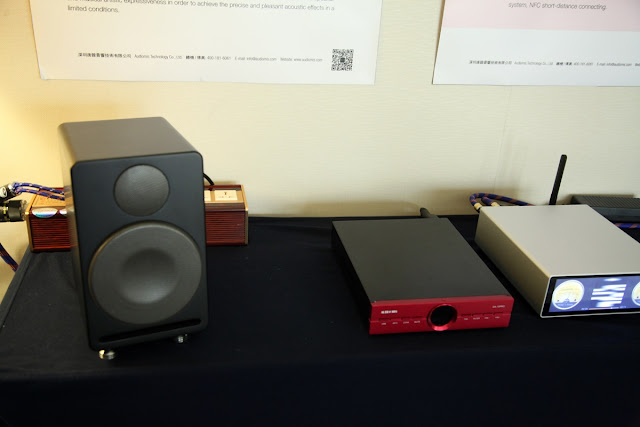 Tien Audio of Taiwan had a stacked pair of Falcon speakers. It's been a long time since I've heard stacked speakers - it's worth spending some time in this room. 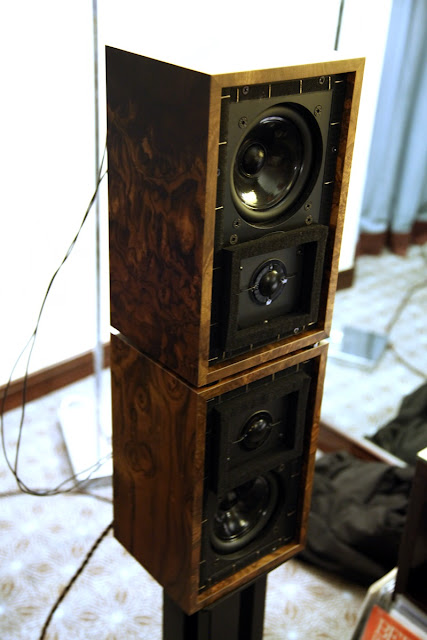 LZE is a manufacturer from Hong Kong. The kit looks quite nice and are quite affordable. 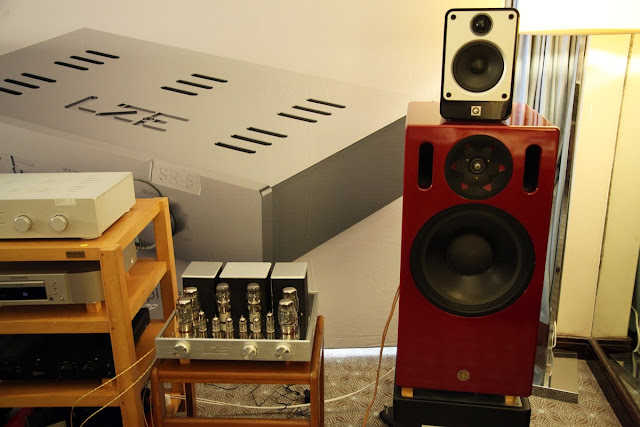 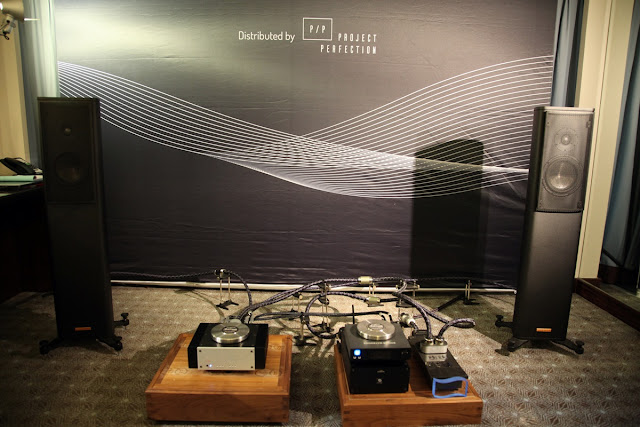 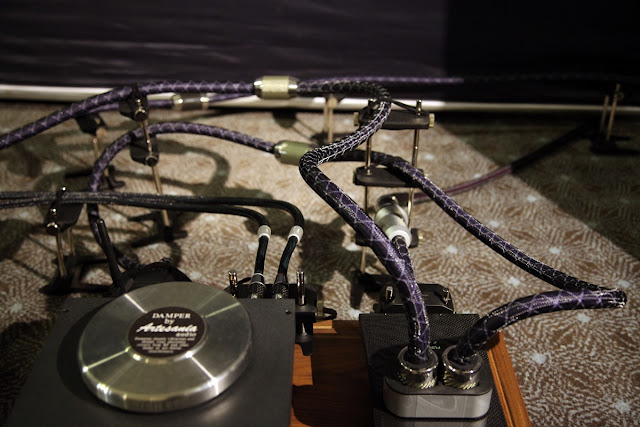 Audiosound did something very different this year. I spent a while enjoying movies on Netflix streamed from an Alpha Pro computer from Dreamcore. The model used carries a S$ 5,000 price tag and uses a water cooling system. A Lampizator DAC, Vincent amplifier and Elac Adante speakers completed the picture. The speakers deserve special mention. Designed by Andrew Jones, they deliver very good performance for the price. The speakers are far more complex than they look - the top driver is a coaxial driver which covers both midrange and high frequencies, while an internally mounted 6.5 inch woofer acoustically couples to the 8 inch passive radiator mounted on the front panel. The sealed enclosure can be placed quite close to the wall, and like any good sealed design, offers very tight and tuneful bass. 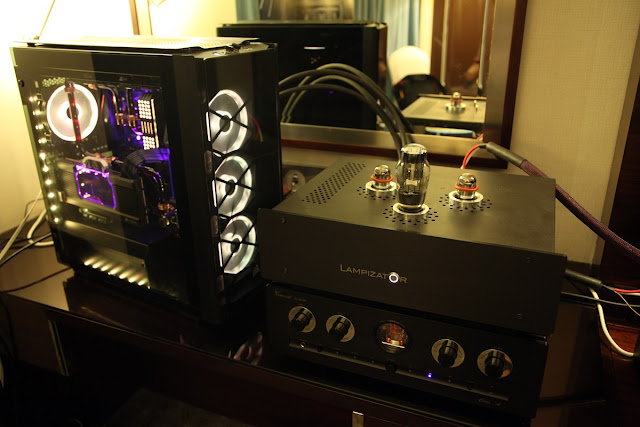 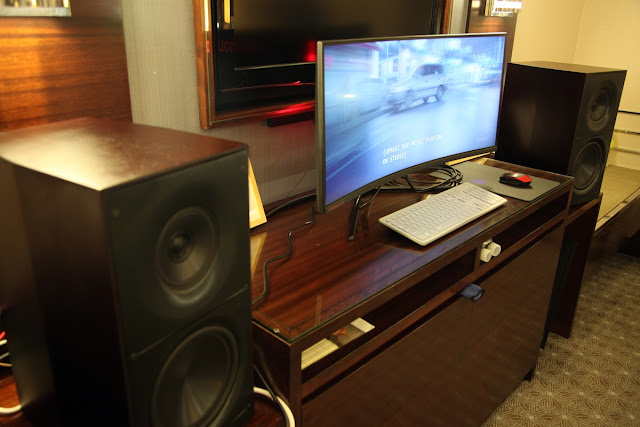 Sky Audio's setup is well worth a listen. The active Dynamikks! speakers sounded very nice with a lot of scale and very nice high frequencies. Compression drivers do get a bad reputation for being too shouty, or in-your-face, and I was surprised how much I liked these speakers. The manufacturer is very clever to put the amplification, and electronic crossover in a separate external box. 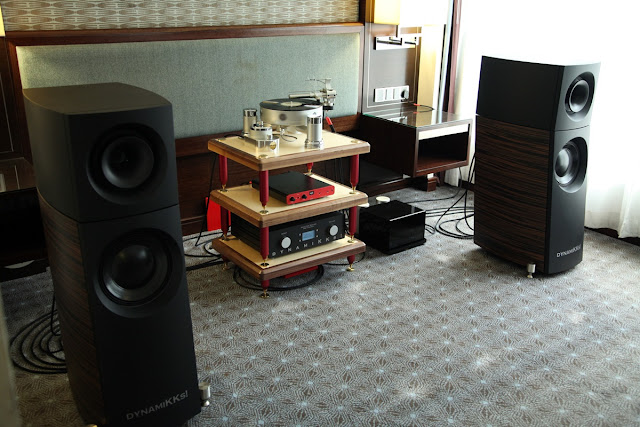 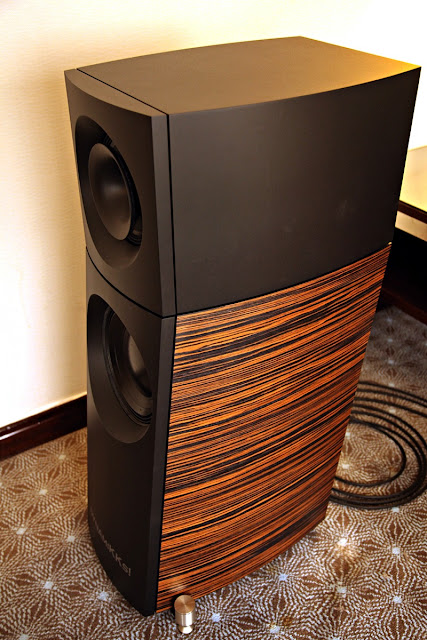 Do ask about the Zorin TP-S5 turntable from Taiwan. I was surprised that it cost far less than expected. 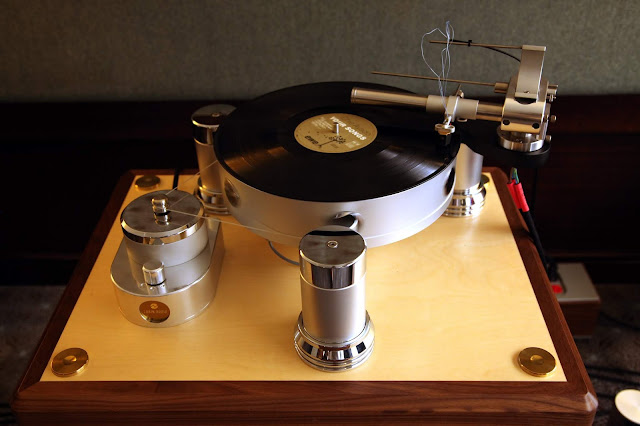 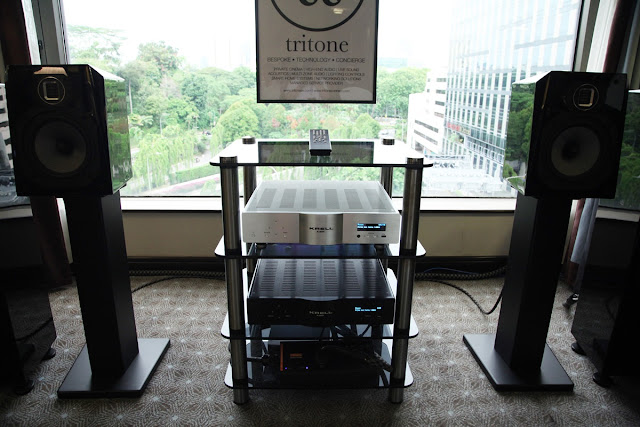 Tritone's setup was clear, impactful yet delicate. The Muhammad Ali of setups alternated between loud rock tracks and intimately recorded violin pieces. They resisted the urge to use their larger speakers and instead stuck to the compact Legacy Studio HD pictured below which was well suited to the small room they were in. They did a talk in the evening to walk attendees through their technical services and Legacy's driver technology. They passed around a disassembled woofer and driver cone. The magnet assembly must have weighed a ton ! 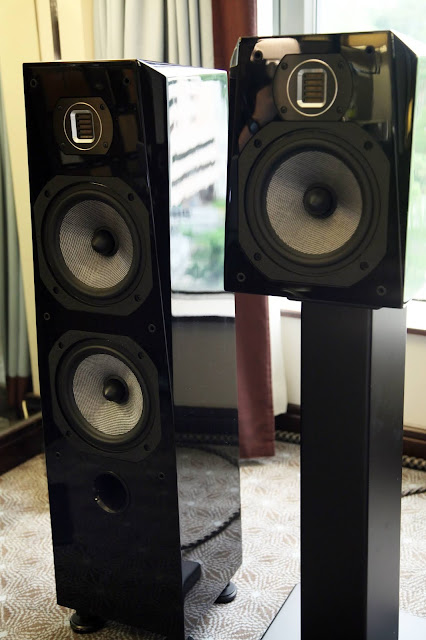 Eighteen 77 had setup a B&W 802 D3 with a Cambridge Audio source and Rotel Michi amplification. I had loving memories of Rotel Michi equipment from my youth - I lusted over their rosewood side-paneled equipment which was far beyond the reach of my very young and impoverished fingers. This setup was quite nice to listen to. 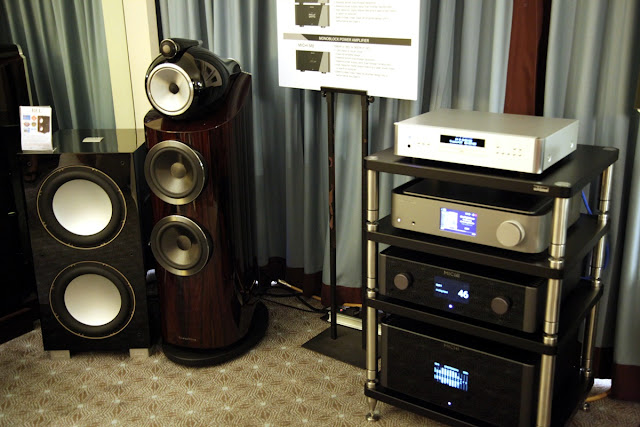 Advanced Audio Acoustics gets my vote for best value for money product. The JM 3/5A is priced from USD 400 to 600 per pair depending on version. The representative explained to me that their speaker is not intended to be a LS 3/5A clone, but to improve on the limitations of the original in reproduction of low and high frequencies. The sonics of these speakers had me floored, with their power and finesse. The JM 3/5A just goes to show that you don't have to be rich to enjoy the finer things in audio. 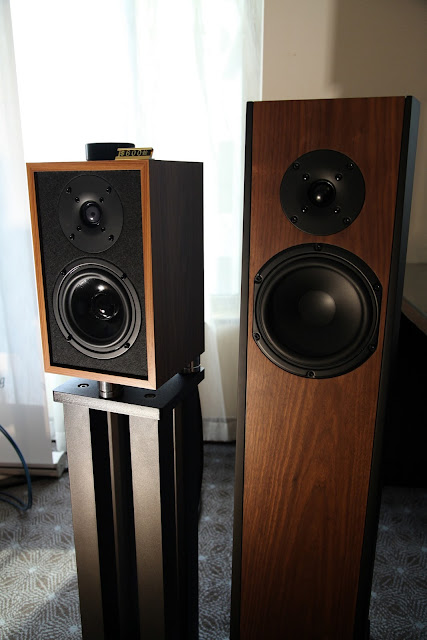 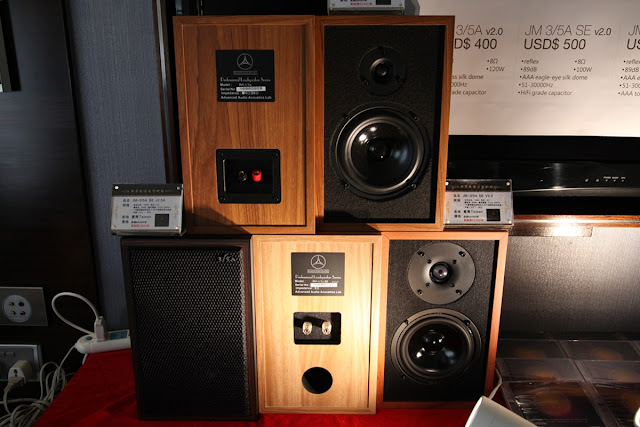 By the time I reached the show venue slightly after lunch, the only tickets available were for the last performance of the day. I was glad not to have missed Eve & Billy's performance. Eve has a lovely voice with very good pitch control and expression. Coupled with Billy's soulful guitarwork, this was a perfect way for me to end the show. 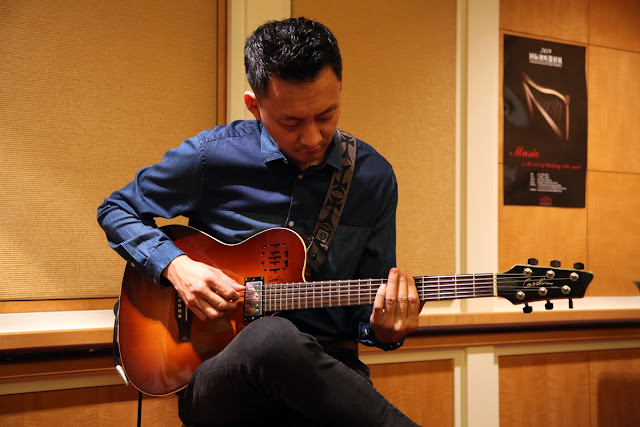 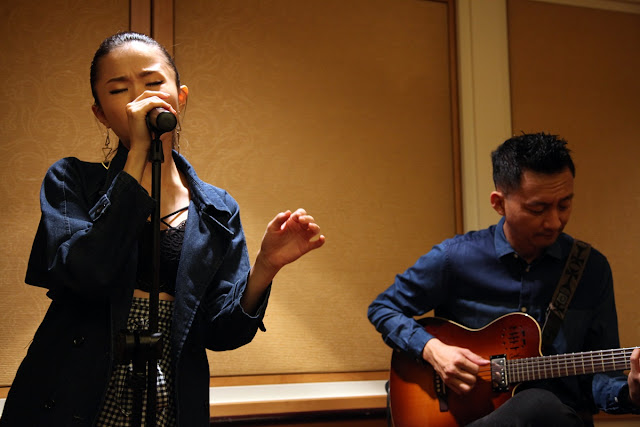 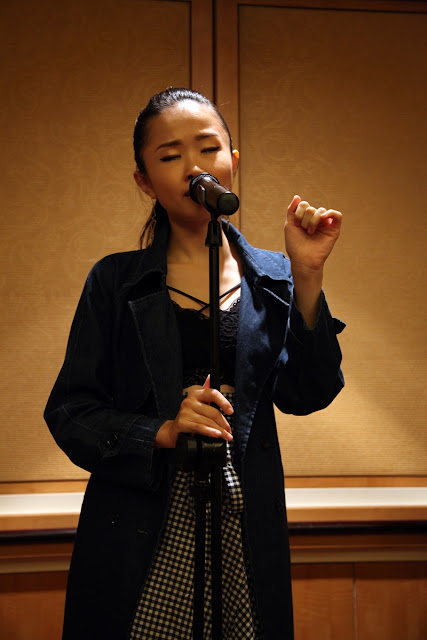 This year's show was smaller with an ever shrinking exhibitor list. A lot of the big names in the local scene were absent, the latest absentee being Ong Radio. Personal audio items were also less prominent since Canjam Singapore is a more obvious choice.

I preferred this venue although the conference rooms are smaller compared to Park Royal at Kitchener Road. Hopefully, the organiser is able to entice back the exhibitors of the past.

See you next year !

Rob Woodland has had another go at USB cables - four years after the launch of the original Curious USB Cable, he has released the Curious Evolved USB Cable.

My original review of the Curious USB Cable can be found here. The premium model costs USD 550 for a 0.8 m length, compared to USD 350 for the original model. All prices include worldwide shipping.

According to Rob, "The Curious Evolved is the best we can do, and will benefit audiophiles who want the maximum performance from the computer based Audio system."

Physically, the Curious Evolved has a close resemblance to the original model. The power line runs externally, and a blue heat-shrink with the model name is the clearest distinguishing mark between the two. The cable has decent flexibility and should have no issues being routed in most systems.

My set-up has changed significantly since the review of the original Curious cable. My computer audio setup consists of a Melco N1-ZH/2 audiophile NAS, paired with a Weiss INT-204 USB/SPDIF bridge. For the purposes of this review, I swapped this with a Synology DS-214play NAS and an SoTM SMS-200 Ultra streamer. This allowed me to place the streamer box much closer to my DAC, and to use the Curious Evolved without any strain being placed on the cable. I also compared the Curious Evolved with a number of USB cables I had on hand, most of which are considerably more expensive than the Curious Evolved.

The original Curious Cable is in my view a cable that addresses many common weaknesses in digital playback :- a lack of dynamics and a flat and un-involving  sound. The Curious Evolved on the other hand is destined for the very best of setups - it simply lets digital gear perform at it’s very best.

Tonally, the Curious Evolved is very close to neutral, with the slightest hint of sweetness and a subtle softness to the leading edge of notes. Make no mistake though, this is not a weak and insipid sounding cable. Music is presented with high dynamic contrast, with good saturation and impactful low frequencies. It takes less artistic licence compared to the original Curious Cable, and bass lines are as powerful, or as subtle as captured on the recording. This neutrality is applied throughout the rest of the frequencies, with a very coherent and even presentation.

By absolute standards, high frequencies do not extend as far as the very best in class, although treble is clean and clear as a whistle. Soundstaging is accurate, with appropriate width and depth. The Curious Evolved casts a noticeably deeper stage compared to the original Curious Cable that projects the stage forward.

Where the Curious Evolved really leaves it’s predecessor in the dust is resolving power and refinement. It unearths micro-detail and expressiveness in a way that eludes the original Curious Cable and presents it with class-leading power and grace. The real kicker in the equation is price - the Curious Cable is able to bring this all to the table without breaking the bank.

If you liked the original Curious Cable and want to move up to the next level, this is the cable for you. If you are looking for a reference standard USB cable, this is a serious contender to consider, with excellent value too. Well done Rob !