The first things that strikes you about the Aurelia Cerica is its unusual looks.Unlike most speakers, the Aurelia is slim and quite attractive to the eye - both for the Audiophile and the unafflicted. The sample I saw one early afternoon at the local dealer was finished in gloss white.

The next thing you will notice is its unusual driver arrangement, which has a symmetrical array of two mid-bass units flanking a cluster of three tweeters. The tweeters appeared to be recessed in a shallow wave guide.

On the rear panel of the speakers,are a single pair of high quality binding terminals, and a presence switch. The dealer explained that this controlled the high frequency output, with the "hi" position recommended for tube amplification, and the "lo" position for solid state systems. 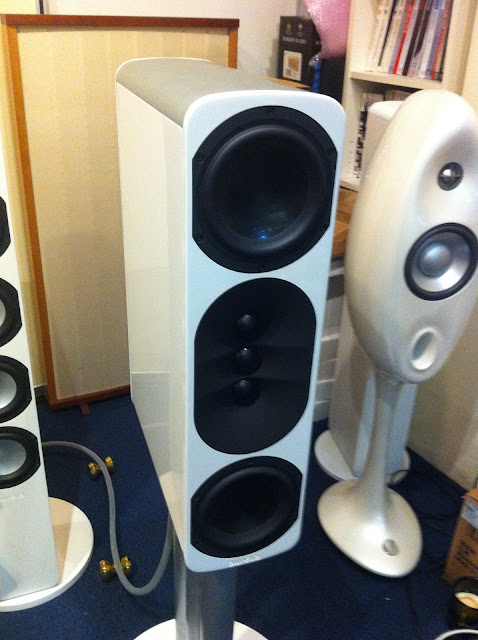 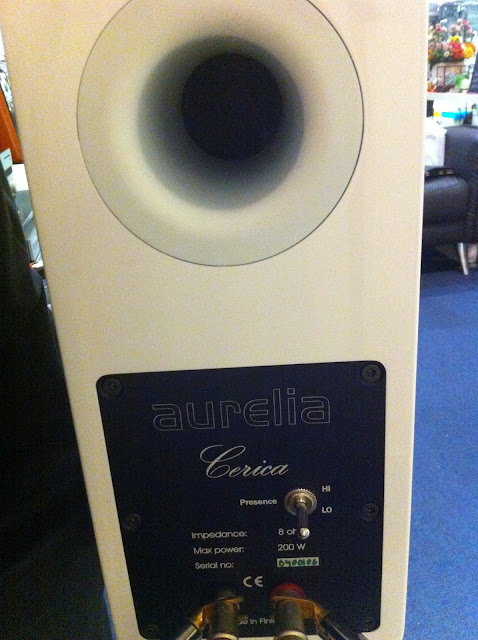 Firing up the Cerica, the immediate impression is one of both coherence and immediacy. The full range driver crowd will feel right at home here. The second thing that impresses is the size of the speaker's imaging and soundstaging.

The Cerica has a very "live" and fast sound, and is quite different from the typical audiophile speaker which sounds more damped, and drier. Vocals take center stage, with a big emphasis on vocal texture and inflection. Listeners who like their vocals presented with laser focused precision are advised to look elsewhere. Music is presented with a very big and dynamic feel, more akin to a live performance, compared to listening to a recording over studio monitors.

Detail retrieval is excellent, with low level spatial clues coming across clearly. High frequencies are "wetter" than normal, with a strong emphasis on reproduction of acoustic space. I felt that its presentation was a little bit too bright, which could be an issue with partnering equipment - I heard them driven by a full set of Trigon electronics. Perhaps, a longer audition with softer sounding equipment is in order.

The Cerica has limited bass though, with no sonic illusions that the Cerica is a bookshelf speaker. Fortunately, the limited bass on offer is at all times, fast, tuneful and tight.

In conclusion, the Cerica is quite different in its presentation from the typical audiophile speaker, and may not suit all taste. However, listeners who demand a lively, dynamic and detailed speaker, with looks that need no excuses are well advised to give the Cerica a serious audition. In gloss white, the Cerica would blend in perfectly in modern styled homes.

Pricing is also competitive. My guesstimate of the Cerica's price pleasantly turned out to be more than 30 % off the mark.

A week after the initial audition, I returned to the dealer who had re-positioned the speaker as well as the spare equipment around it. It happened to be playing when I dropped by and I immediately noticed that the speaker sounded totally different from my first audition.

The speaker sounded neutral, without any hint of brightness which I experienced earlier. The partnering equipment was identical - looks like this speaker requires a bit of setup to make it sing. Bass output was much more, far more than its cabinet size would suggest. On the downside, I felt that the immediacy and vibrancy was better the first time round.

I just heard this at the International Sight and Sound Exhibition 2012. It sounded really great in the small hotel room, with both deep, extended bass, and an immediate midrange coupled with extended high frequencies. In fact, the Cerica sounded much better compared to the earlier two occasions I listened to it.