Pop Pulse is a small Hong Kong based company that offers a small but interesting offering of audio products.

The T-AMP180 ("T-180") is a nicely sized integrated amplifier. Based on Tripath chips, the T-180 joins a plethora of similarly equipped electronics available in the market. Bearing in mind that many of such examples are available very cheaply off the internet, the T-180 would need to distinguish itself to stand out to attract audiophile attention. 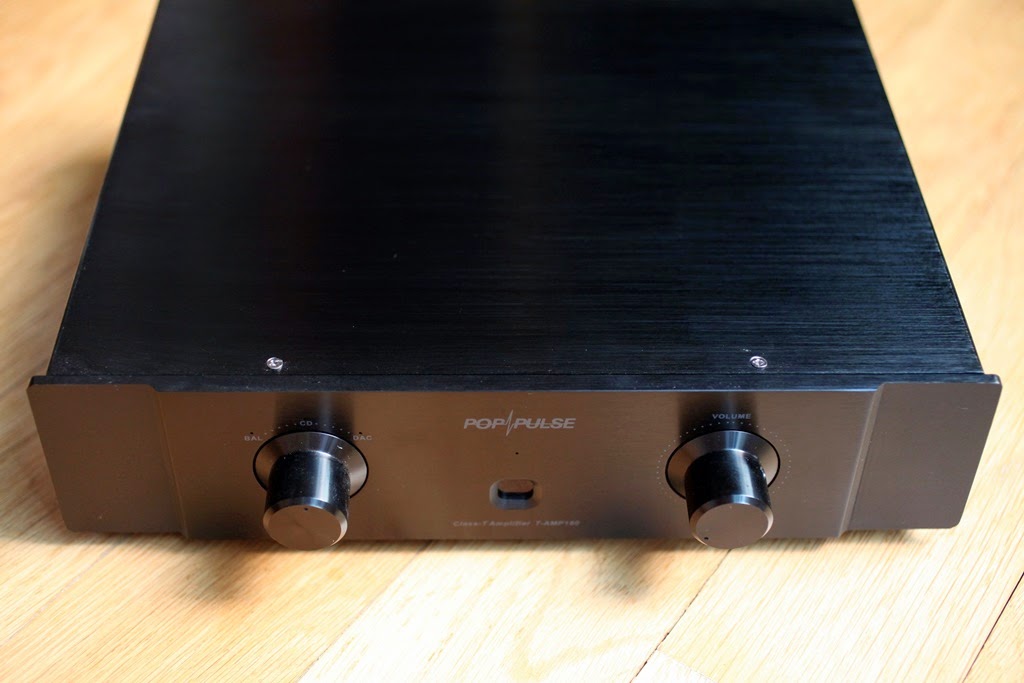 The black aluminium face plate sports two identical knobs, one for selecting input (via a spring loaded knob), and the other for controlling the volume. A small plastic remote control is provided.

Turning to the rear panel reveals 3 pairs of line level inputs (one of which is 3 pin XLR balanced inputs), WBT style binding posts, an IEC mains inlet, and a rocker mains switch. 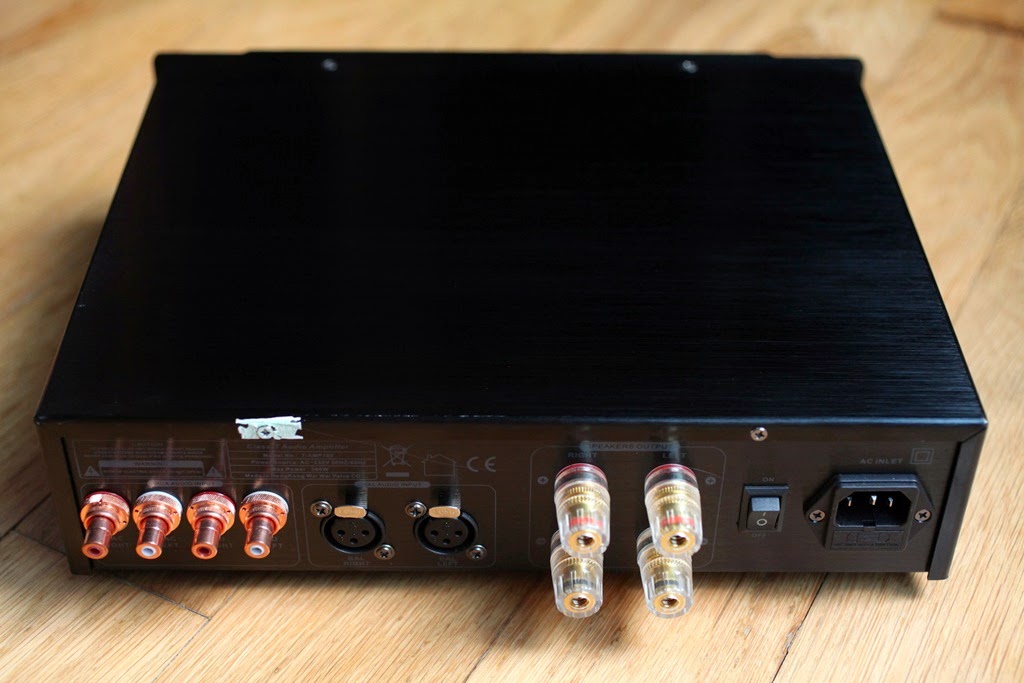 The T-180 is based on 2 x Tripath TA2022 chips, which have been bridged to deliver higher output power. Claimed power output is 120 watts into 8 ohm loads, and 180 watts into 4 ohm loads (specified at 0.1 % THD). There is no free lunch in this world, and bridged operation will result in the amplifier seeing half the actual load. Although the Tripath datasheets do not advise outright against low impedance loads, they do warn that amplifier efficiency will be reduced and that the current limiting may be prematurely triggered under such conditions.

Parts quality is good with a 4 channel motorised Alps pot controlling volume, LME 49720 op amps in the preamp section, and Philips,  Panasonic FC and Nichicon Fine Gold electrolytic capacitors spotted throughout the circuit. The circuit design is claimed to be fully balanced, which would explain the 4 channel pot. Lastly, a large toroidal transformer is used in the power supply.


One interesting feature is the ability to "bypass" the preamplifier section by moving two switches internally. The volume control remains in the signal path and you are supposed to turn the volume control to maximum. This allows you to pair the T-180 with an external preamp, or DAC with volume control.

The LME 49720 chips are mounted onto sockets, so you could tune the T-180 to taste by using other compatible opamps.

Ergonomically, I think the location of the power switch is less than desirable. Apart from the rocker switch being quite small and difficult to feel for, it was blocked by my left speaker cables that were connected to the binding posts via spade terminations.

I also found the gain quite high, with very little range for adjustment on the volume knob, especially when using the balanced input.

Other than that, operation is quite hassle free. The T-180 thoughtfully remembers your last input, and resets the motorised volume back to zero each time you switch on the machine. Yes, it is a hassle if you are using the T-180 as a power amp, but it sure beats blasting your system to bits.

The T-180 ran slightly warm after extended periods of operations. Partnering equipment was the following :-

Most of my prior experience with Class-T equipped amps have been with the TA2024 chip which is a low powered design. My memories of it - nice, smooth and warm sounding.

The T-180 was therefore quite a shock during listening tests. It has a neutral balance with a very clean and open mid-band. If you are looking for a euphonic and cuddly amp, this is certainly not one of them.

Bass authority was very good, with a tight grip. There was really nice speed here which contributed to a fast and tuneful presentation. A relatively moderate amount of mid-bass bloom meant that the T-180 had a slightly full bass with good weight.

Midrange had good clarity and a slight sweetness. Vocals were grain-free and easy to listen to for extended periods of time.

Treble is good and evenly balanced compared to the rest of the frequencies.

Resolution is well above average, with good retrieval of microdetails. However, a slight reduction of air  made percussion work a little bit more closed-in than I am used to, with some diminishing of cymbal decay.

On the staging front, the T-180 had reasonable depth and width, but presentation had less three dimensionality by absolute standards. Compared to the Job 225 which I own, the T-180 had flatter perspectives.

Control over busy mixes was also good with adequate separation between instrument lines.

In use, I never found the T-180 lacking in power or drive - the moderate efficiency KEF LS50 didn't even make it sweat one bit.

The T-180 sounds much brighter through it's single ended inputs. You get a livelier sound, with a trade-off in separation, microdetail and a flatter soundstage. I ended up listening to the T-180 during most of the evaluation period through it's balanced inputs, which I preferred.

(with an external preamp)

I also tried driving the T-180 directly through the volume control of my Antelope Zodiac Gold DAC. The Antelope has a very high quality volume control, with attenuation controlled via a relay activated resistor network. I preferred using the the T-180's internal preamp circuit for better soundstage depth and more dynamics and drive. You could say that this is a testament  to the quality of the T-180's line stage. Although the result was not as expected, it is a nice option to have.

I was very impressed with the T-180 in the one month I had it with me. You get very competent performance and generous amounts of power - all for a modest price tag.

I would exercise some caution in matching the T-180 with bright sounding equipment. Apart from that, the T-180 is highly recommended.

The T-180 is available in Singapore from

Horizon Acoustics is offering the T-180 for an introductory price of S$ 650 at the time of writing.

A word of thanks to Mr. K.M. Poon of Horizon Acoustics for supplying the review unit.
No comments:

Interconnects are a nice introduction to the world of DIY. The difficulty factor can vary according to your preference, and very little electronics knowledge is required. All you need are the raw materials, a soldering iron, and good soldering technique.

You can easily make good interconnects that can perform well beyond your investment in material costs.

Your choice of plugs should have decent construction quality, precious metal plating to prevent corrosion (e.g. gold, silver or rhodium), and easy to use solder tabs.

My favourite low cost RCA plugs are the Neutrik / Rean NYS-373. If you are willing to spend a little more, consider the Canare F-10 or the Neutrik Pro-fi. For cost no object experiments, I have been very impressed by KLEI Innovations' Harmony plug.

I have found the Neutrik / Rean NYS-373 to be a little tight fitting on some RCA sockets, necessitating a bit of adjustment of the ground blades with needle nose pliers (protect the plated surface with a cloth first). Other than that, they are no nonsense plugs at very low cost.

The Canare F-10 has Teflon dielectric insulation between the signal and ground contacts. Apart from excellent dielectric absorption qualities, Teflon is very heat resistant which gives you a little bit more time when working with your soldering iron. Of course, good soldering technique should allow you to work on almost any plug without issues.

What type of cable geometry should you use ? I've not been particularly fond of coaxial cable for analog use. However, using 75 ohm coaxial cable does allow you to use the cable as either an analog or digital interconnect.

Here is a list of some of the cables I've used over the years for single ended analog interconnect projects,

The two most outstanding cables in the above list would have been the Mogami 2803 and 2497 although they are quite difficult to find. However, be forewarned that the Mogami 2803 will test your patience and dexterity in stripping and assembly.

This is suitable project for a first timer.

The Amtrans cable is sold as a twisted pair run, so you only need 2 meters to make up a 1 meter pair of interconnects.

The two conductors have different colour jackets and therefore easy to identify. Just make sure that you are consistent - one leg goes to the center pin (hot or positive), while the other leg goes to the ground.

The Amtrans has a nice solid punch to it. Midrange has a bit of a honeyed glow to it, while high frequencies are clean, although not particularly extended. Overall resolution, imaging and staging are above average. Tonally, I would put these cables at slightly off neutral, and towards the warm side of things. For budget to midrange systems, this is all you should need. However, if your system is a little bit dark sounding, this cable may just make things worse. 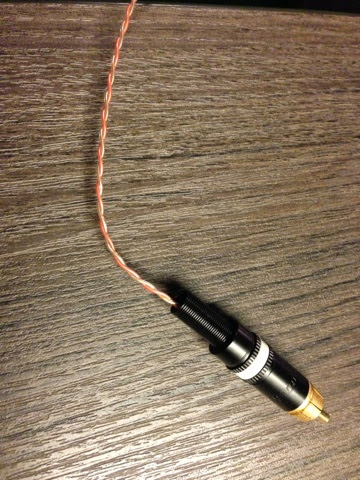 OK. I didn't make this out of unobtainium cable or plugs made out of solid gold. However, the parts cost for this project is about USD 250 for a 1 meter pair of interconnects. This is a generous budget intended for the hobbyist seeking top notch performance. 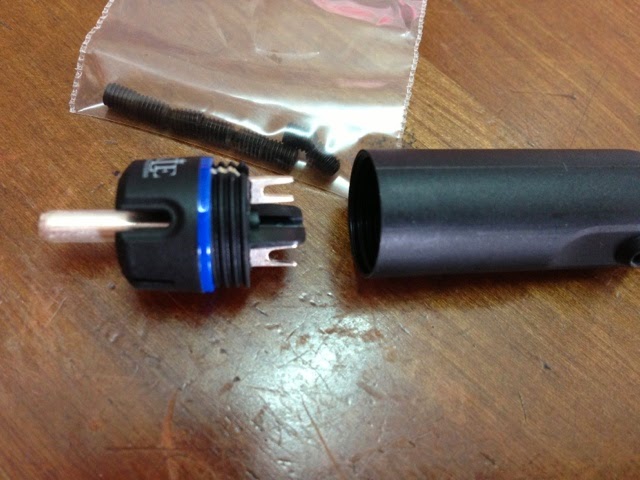 The most difficult part of this project is stripping the 26 AWG cables. The Teflon insulation was a bit difficult to cut through without losing some strands. A gentle touch is definitely needed here. 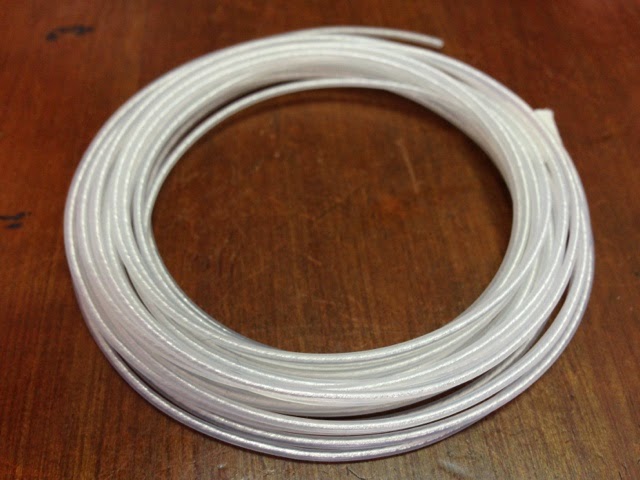 The 5 meters of cable is divided up into 4 equal runs. After a simple anti-clockwise twist, you will end up with cables just slightly over 1 meter in length.

I don't recommend this as a first time project. Your soldering should be steady and clean. Choice of solder is really up to you. Whether you use bog standard solder, or something more exotic, just make sure that you make a good and clean solder joint. I personally use WBT Silver solder or Kester 44.

The resultant cable is the epitome of low mass. A completed pair weights just 33 grams !

The KLEI Harmony plugs are the finest RCA plugs I've used. Solder lugs are easy to use, and the plastics used are far more rigid than the first generation Eichmann Bullet Plugs, which were designed by the principal of KLEI. The strain relief applies even pressure from opposite ends, which should allow the cable to sit squarely in the center of the barrel. The twisted pair of cables I used are very fine, so the strain relief doesn't do much here.

These cables perform to a much higher level than the Amtrans. There must be something special about the Silver / Gold wire used here. The Neotech is fast and open, and at the same time absolutely free from grain. It has a detailed midband, with outstanding high frequency extension.

The only thing I could have wished for is deeper bass extension. Although bass lines are well articulated and tight, it does not go as deep as some of my other cables.

If I were to put a price tag on these as a commercial product, I would put these on par performance wise with cables in the USD 1,000 to 1,500 range.