Good things come in small packages ! Well this does not always hold true for audio equipment, but nevertheless, the Calyx Coffee is really diminutive and cute as a button to boot. 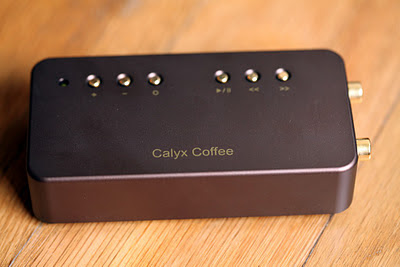 The Calyx sports the current in-thing for DAC chips, the ESS Sabre. At the Calyx’s asking price, you obviously luck out if you were hoping to get the Reference Sabre chip. Instead, you get the ES9023 which sports two D/A convertors (vs. the eight found in the Reference chip). Like the rest of the Sabre chips, the ES9023 also boasts technology such as Hyperstream Architecture and Time Domain Jitter Eliminator (the complex technical details of which overwhelm my feeble mind).
Interestingly, the ES9023 chip includes a 2VRMS driver which would presumably allow a designer to skip the op-amp stage and use the ES9023 as a single chip solution.

On the bright side, your hard-earned money gets you a 24/96khz capable DAC with asynchronous USB connection, and a fairly competent headphone amplifier. The most obvious target market for the Calyx would be in a computer based head-fi or desktop set up. Given its small size and portability, it is also the perfect traveling companion, and was in fact the reason I purchased one. Pack in a nice pair of earphones with your notebook and the Coffee, and suddenly your work trips do not seem so lonely after all.

Dressed in a shade of a rather weak looking cup of Java, the Calyx is a simple bar shaped device. On one end, you will find its single USB input, and on the other, a pair of RCA outputs, and a 3.5 mm headphone jack. 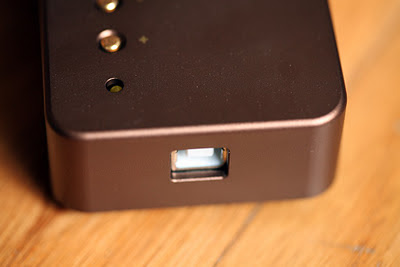 The top of the unit is adorned with a single neat row of small gold buttons, that can control the source computer, with the ability to control play, skip and volume control (including mute). Stick on rubber feet are provided, so no worries about marring the beautiful surface of the Calyx. No cables of any form are provided, which is fine with me. Most freebie cables end up in the dustbin anyway. The Calyx draws its power from the computer’s USB port and there is no option to power it from an external 5V power supply.

Shaking the unit results in an alarming rattling sound. I was worried that something was broken inside, but the dealer assured me that it was just the buttons. True enough, the rattling stops if you apply a bit of pressure on them. Other than that, build quality is excellent. There are no screws or joints on the top and sides of the unit, so the Calyx is presumably milled from a single aluminum block. The bottom plate is screwed on though, making the enclosure of the Coffee a two piece assembly.

Installation was straight forward and hooking up the Calyx to my computers running Windows XP and Mac OS/X Lion were hassle free. No drivers were required and the Calyx was immediately recognized. Everything worked as expected, including the operation of the buttons to control the volume, etc. The steps were a bit coarse though, and I ended up using the slider bar on Windows to control the volume of the Calyx.

The Calyx Coffee has enough juice to drive most ear or head-phones on the market. It certainly had no problem driving either my 250 ohm Beyer DT-880 or my Audeze LCD-2. With the latter, volume is almost maxed out, so LCD-2 users who listen very loud may want to look elsewhere. Sound quality is good, well above average and far better than you expect for its price.

Hooking up the Calyx to my main hi-fi system, I questioned the sanity of using cables (Acrolink 7N-D5000 RCA and LAT International USB 2) which were more than 8 times the cost of the Calyx. I then awaited for the David vs. Goliath moment. After a few minutes, it was obvious that my Audio-gd DAC 19 was in no danger of being outclassed by the Calyx. The Audio-gd is close to 4x the cost of the Calyx, so no surprises there.

The Calyx has what I consider to be the typical Sabre house sound - slightly laidback and hyper-detailed. Sabre chips do not have the incisive leading edge emphasis of more analytical chips, but instead presents its sonic picture in a natural way. The details are all there, but are not presented with the stark contrast and leading edge emphasis of some of its competitors.

Bass is firm and slightly full. However, it lacks slam and extension. Bass freaks will definitely not be satisfied. You could say that the Calyx is slightly bass shy but the overall quality of its limited bass is quite high.

Midrange is one of the Calyx’s stronger points with a smooth and natural human voice. The usual suspects of sibilant tracks are quite well behaved and it is unlikely that this DAC will come across as cold or harsh. Listening to Eva Cassidy's album, “Live at the Blues Alley”, you get a sense that the Calyx chooses to honey coat things. The usual sibilance and slightly piercing quality of Eva sounds very nice on the Calyx – a bit too nice to be true.

High frequencies are clean and fast, and the sense of acoustic space is well conveyed. Nevertheless, treble extension could be better and is easily bettered by more expensive equipment.

Imaging is good, but soundstaging is slightly flat, with a reduced perception of width and depth in recordings. This is very noticeable as a loss of presence and air on Janos Starker's recordings of Bach's Suite for Solo Cello. Instruments and voices are also placed further back than my usual gear, with slightly smaller image sizes.

The Calyx is also not the most dynamic DAC out there. Rock and metal lack some energy and rawness. Faster music sometimes comes across as being a bit too polite.

Detail wise, the Calyx is definitely a significant upgrade over a stock computer soundcard or chip. However, some level of microdetail is lost, which is apparent when compared to the Audio-gd.
Two things I would have liked to see would be support for a RCA digital input, and support for 88.2 khz sampling rate. The first omission is forgivable since the Calyx is clearly not intended for primary use in home systems. However, the second omission is less so. The lack of 88.2 khz sampling support deprives native decoding of some source material out there (admittedly quite rare), as well as 2x up-sampling of red book material. My personal experience with red book up-sampling, is that it sounds more natural up-sampled to 88.2 khz compared to sample rate conversion at non integer multiples, e.g. 96 khz. I know what many will say, the big brother Calyx DAC is the answer to my wish-list.

In summary, the Calyx is a great upgrade for computer audio users. It is very competitively priced and competent. I am very impressed with the Calyx Coffee and recommend it highly for a portable computer based setup, and even more so, if primary listening is being done through head or ear phones. If using inefficient or difficult to drive headphones, I would advise you to try before you buy.

For home rigs, the Calyx is a less convincing proposition. While it is adequately suited for budget rigs, spending a bit more would definitely pay more dividends in the long run. Then again, for the money, you certainly could do a lot worse.

The weaknesses of the Calyx Coffee should be viewed in context of its affordable price. When used without reference to better (and much more expensive) equipment, the Coffee is musical, offers a useful upgrade in resolution and is pleasing to the ear. It gets a lot of things right, with good tone, especially for those with a musical diet tuned more towards jazz, vocal recordings and chamber music. It is only when you do direct comparisons to other gear, that you realise what is missing. Throw in its head amp stage, and you realise the excellent value proposition presented by the Calyx.

Postscript - Calyx Coffee users should try pairing their units with the ifi iUSB power supply. This provides a significant boost to the performance of the Coffee.
2 comments: