I love organic products ! Coming from Sweden, are these delicious (but unfortunately inedible) products, which are the brainchild of Mr. Per-Olof Friberg.

Mr. Friberg is self-described as a farmer. This is a rather refreshing change from the background of the founder of some other audio companies, e.g. NASA scientist, aerospace engineer, weapons-I-Can't tell you what I made scientist, espionage agent .... OK I made up the last one.

The MinimUs came in a plain cardboard box and "interesting" packing. I opened it in front of my significant other who was half expecting to see some lovely pears packed, but no, it was just another boring audio device.

The MinimUs is a wooden case, which is much heavier than its size suggests. The wood fascia looks like it is laser engraved. The rear sports a single copper binding post. Interestingly, the binding cap is made out of wood - careful now with tightening the cap, you don't want to strip the threads. 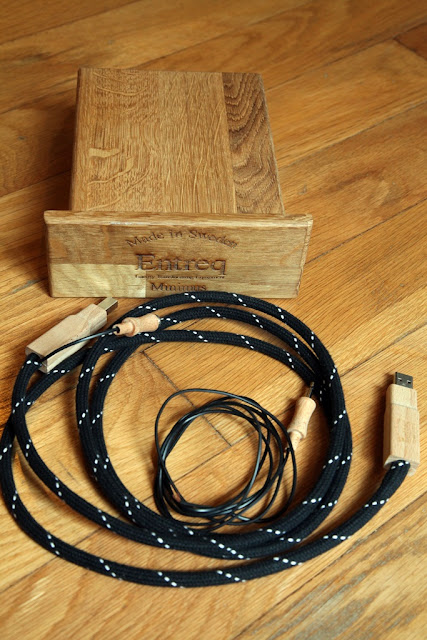 What is inside ? I have no idea. Shaking the box produces a rustling sound, much like sand. The unit is well sealed (with no visible screws), so we can forget about taking this box apart.

The instruction manual suggests that a single MinimUs can be used for up to two sources, while two boxes can be used for the speaker cables. If you go for the larger unit, the TellUs (which has 3 binding posts), you can treat the whole system.

No cables are provided, so I jury rigged some out of a unused Canare F-10 RCA plug, and some 14 AWG mains cable soldered with alligator clips on each end (which I use for my DIY tests). Entreq of course sells the required cables, in both copper and silver. Pricing is reasonable, so you don't have to resort to my measures.

The instructions warn against using the MinimUs as a replacement for protective earth. We could therefore assume this to be some type of ground enhancer. How this enhances ground, I have no idea. But it certainly enhances the sound.

Hooking up the MinimUs to an unused output (sorry, my amp is out of inputs. Ground is internally connected together anyway - verified by a multimeter), quickly shows how potent the MinimUs is. There is no superlative descriptions of lowering of the noise floor, or blacker blacks. Rather, everything is thrown into sharper focus. There is useful enlargement of the soundstage and improvement of spatial clues. However, the best way to describe this is a relative relaxation in tone, a increased sense of ease and flow, for want of a better description. I particularly appreciated that the MinimUs did not deaden the sound nor kill the sense of air, which sometimes happens when using ground enhancers / mains filtering products.

Coming to the Konstantin USB cable, more than a passing resemblance to an old kettle cord is noted. Much like the MinimUs, the Konstantin uses wood plug housings. Attached to the USB B plug side, is a female headphone socket that accepts a mating plug wire, which is intended to be attached to the system ground, or alternatively the MinimUs.

First, let us be clear on the debate on whether or not USB cables make a difference. If you strongly believe that it does not, then this would be the point that you would conclude that I have absolutely no credibility. You can also pat yourself on the shoulder for the time you have saved from having to read the rest of this drivel.

For those of you still with me, you would agree that USB cables do sound different, although the "why" and "how" still remain a question mark.

The Konstantin is quite a special USB cable. It casually kicked the Nuforce Impulse cable I had lying around into the abyss of no return before coming face to face with the L A T USB 2 cable. The L A T muttered some excuse about having a dentist appointment, and turned tail in a flash.

An additional 10 hours of burn in helped somewhat, but the general lightweight balance remained. At this point, I took out the grounding cable, stripped the insulation at the end and connected it to the MinimUs.
Instantly, the cable came into focus, and the music took on sufficient tonal density to look like a real picture, rather than the pastel shades of water colour paint prior to that.

Want an incisive presentation with emphasis on the leading edge of notes, with explosive dynamics ? Looks elsewhere.

The best word to desribe the Konstantin / MinimUs combo would be "natural". The combo has a sense of ease and unforced naturalness that will guarantee hours of listening pleasure without listener fatigue.

Tonally, I would put the Konstantin / MinimUs in the neutral camp. Despite its musical and natural balance, this is neither a veiled nor shut in cable. It excels in both micro detail and placement of instruments. There is a noticeable increase in transparency coming from the L A T cable (let's not even talk about stock cables here).

Bass and dynamics are not of the bone crunching variety, but are both fast and tight. This cable impresses most in the midrange upwards, where the human voice is nicely balanced and is placed in fine balance between smoothness and transparency. Drum set work is a real treat, with nice impact and decay on ride cymbals, and the opening and closing of hi-hats coming across in a clear and distinct way.

This is not a cable that would immediately impress on A/B comparisons. It was only after some extended comparisons that the strengths of the Entreq combo becomes apparent. In comparison, the L A T is messy in its soundstaging, and lacking in refinement. There is a hint of harshness that is immediately noticeable when switching from the Entreq to the L A T.

Any critcism ? The first would probably be a lack of upper mid-bass bloom that could be helpful in some systems to fill out the lower registers. The second would be price. The Entreq combo (and I really see them as a system rather than as separate components) are in serious price territory. The resulting four digit price tag (in Singapore dollars) would have many chuckling at the "insanity" of purchasers. Should you care ? As one senior audiophile once told me, "Who is to say it is wrong if the money makes the most improvement in your system for the amount spent ?".

What about using the Konstantin without the Minimus ? There is a slight loss of quality if you tie the grounding wire to a normal ground source, e.g. your preamp chassis or the ground of a RCA input, but I would say that you would be missing about the final 10 % of what this cable is capable off.

I also tried this in a friend's system recently. He had recently bought the Oyaide Continental 5S USB cable. The Oyaide has a dynamic and exciting sound. It is the perfect kick in the pants if your system sounds slow and dull.

The Oyaide had a more forward presentation, with better "projection". The Entreq had superior low level detail, and refinement . Interestingly, the Entreq had superior imaging and control, with vocals and instruments locked firmly in their place. The Oyaide is less than half the price of the Konstantin with MinimUs, so you could say that the odds were stacked against the Oyaide.

I certainly would not advocate that everyone rush out to buy the Entreq. In fact, in modest set-ups, the L A T USB cable was quite impressive, especially if you consider that it costs 10 % of the Entreq combo. But if you have a very good setup, and the Entreq does it for you, then it is really is the icing on the cake. Highly recommended.
4 comments: