Here is a line-up of items that will be featured soon (in no particular order),

My first encounter with the SS-NA5ES was during Sony's "Feel the Air" event last year in October. I was quite impressed by the performance of the NA5ES, despite it being paired with a home theater receiver, and setup in a large acoustic space.

This is certainly not your run-of-the-mill speaker. The cabinet is constructed out of Scandinavian birch wood (chosen for it's density due to the slow growth of trees there) and finished in deep brown gloss veneer by craftsmen in Japan. Under dim lighting, it appears to be almost black, and has one of the most impressive lacquer finishes I've seen on a speaker cabinet. Needless to say, the quality of the cabinetry work is top notch. 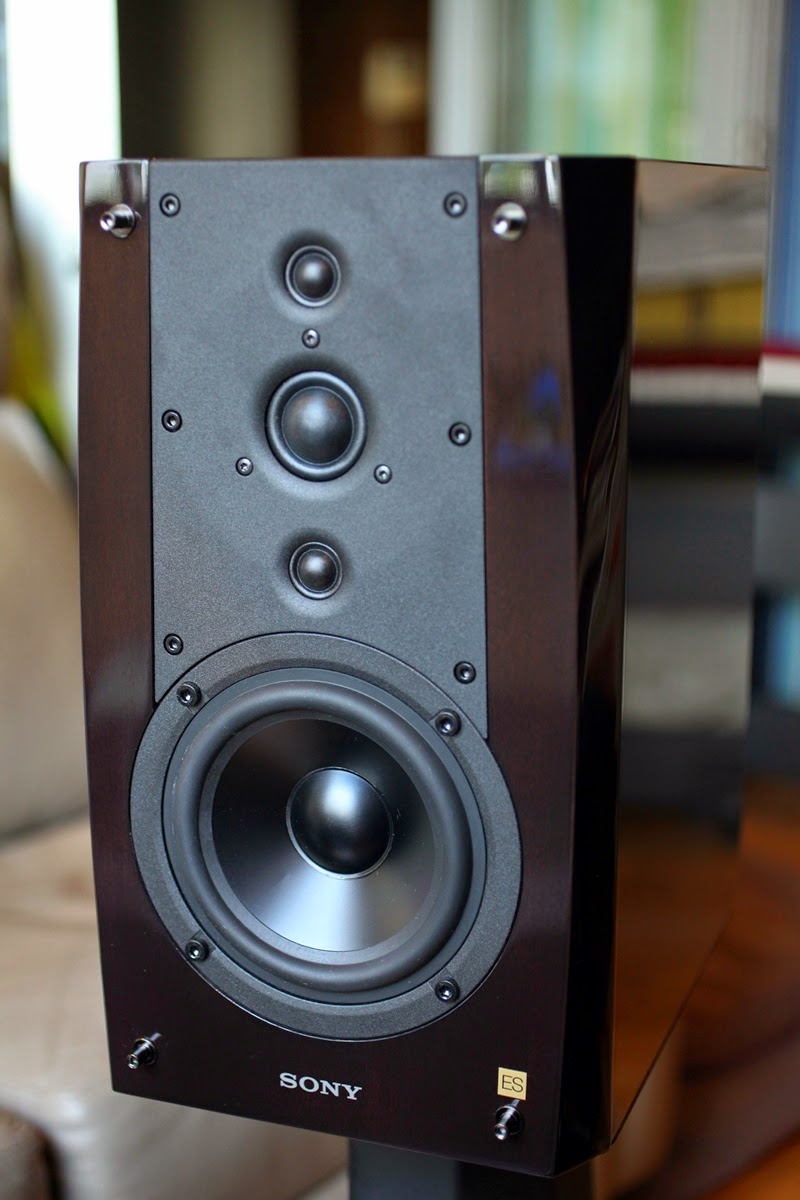 The rather petite cabinet (355 mm(H) x 205mm (W) x 325mm (D)) is deceptively heavy (10 kg). The woofer is a 130 mm cone driver, while the tweeter is highly unusual. The tweeter is termed by Sony as "I-Array" and has a single 25 mm fabric dome tweeter, flanked by two smaller 19 mm drivers on top and below of the main tweeter unit. 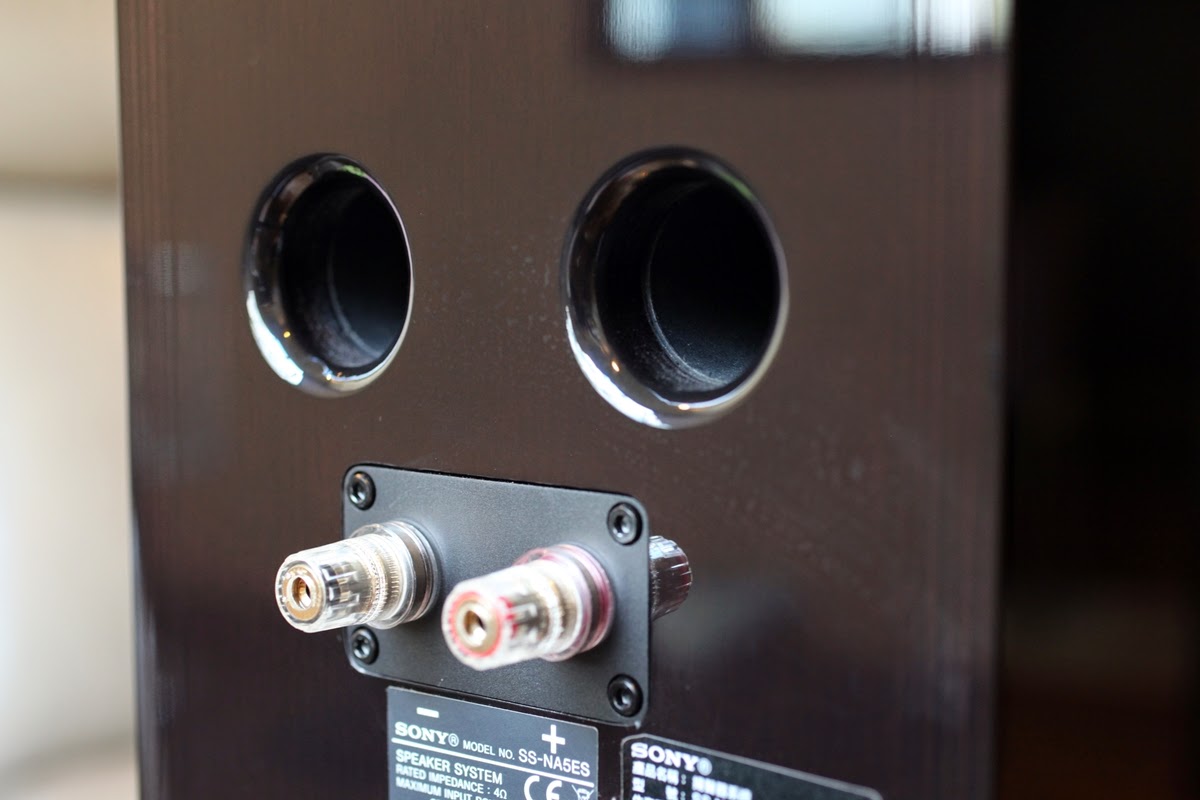 A single pair of binding posts sits below the twin reflex ports which are slightly flared, presumably to reduce port noise. Unusually, the base of the speaker is attached to a metal plate.

Specifications wise, the NA5ES has a nominal impedance of 4 ohms and sensitivity of 86dB. Rated frequency response is from 45 Hz to 45 kHz (no limits stated), and maximum power handling is 70 watts.

I took much longer than usual to setup these speakers. They did not like my high mass Partington Dreadnought Broadside speaker stands, sounding too damped and restrained. A pair of half-filled Atacama SE24 stands proved to be a far better match.

Coming to amplification, the match with my Gryphon Diablo was personally underwhelming. It sounded alright, but not really up to the mark of my previous experiences with the NA5ES.  A pair of Bel Canto Ref 500M monoblock amplifiers sounded much better, but they really performed with my Conrad Johnson GAT and ART mono blocks.

I set up the NA5ES in both my bedroom system and main listening room. In both cases, they were used quite far away from the walls, with a minimum of 90 cm from the rear of the cabinet to back wall, and at least 60 cm from side walls. I ended up toeing in these speakers more than my usual angle of about 10-15 degrees inwards towards the listener, and settled for an angle of just under 30 degrees (being barely able to see the inside edges of the speaker cabinet). Listeners should avoid being too far off the vertical height of the tweeter array. While the I-Array tolerates vertical offset much better than say a ribbon tweeter, it does sound fairly different if your listening position is more than 2-3 inches above the tweeter's height.

The NA5ES has a very put together and refined sound. It sounds far bigger than it looks, thanks to a dynamic low-end punch and a fondness for higher than average volumes.

Low frequencies are reproduced with a full mid-bass and very nice bloom. Faster music is handled well and the Sony's 130mm woofer (slightly over 5 inches) is capable of moving a good amount of air with commendable agility.

Midrange is smooth and somewhat laidback. There is decent clarity and vocals are presented with a slightly warm and pleasing tone. Some detail is traded-off here, and this is likely to appeal to listeners who want to hear a more musical presentation, rather than those who are seeking a more analytic approach.

Despite having three drivers devoted to high frequencies, the NA5ES sounds anything but bright. The I-Array unit is deployed subtly, with a silkiness and refinement that is quite outstanding. While the treble is very detailed, it is presented with less prominence compared to the rest of the frequencies.

Tonally, these speakers reproduce the piano with more grandeur than usual, but with a slight reduction in attack and articulation. Similarly, string instruments have a sweeter and fuller sound, with less bite. I would hesitate to describe the NA5ES as coloured though. Perhaps a more apt description would be to describe these speakers as romantic and sensuous.

The NA5ES really shines in the areas of coherence, staging and imaging. It presents a very wide and deep soundstage, with very good placement of instruments and the vocalist. The Bel Canto amplifiers tended to portray a flatter perspective and drier top-end, but the Conrad Johnson amplification really added a three-dimensionality and air that I've seldom heard in this price range. The sheer holography of these speakers when paired at such, created such a powerful illusion that I totally forgot my task at hand being momentarily transported to the venue of the recording !

While I greatly appreciated the NA5ES's strengths, it is not perfect (no component ever is).  From a pricing point of view, the NA5ES is expensive and has to face-off with very keen competition. Some of it's competitors can outperform the Sony in certain areas for less, but few can compete with it's beauty of tone or ability to soundstage and image so convincingly.

I also found it to be quite fussy with placement, and partnering equipment, necessitating careful matching and setup. A healthy dose of experimentation would likely be required to bring out the best from these speakers.

I must confess to have been very taken with these speakers - they are visually beautiful (sans their underwhelming grills), and really draw you in to the music. They do not resolve to the nth degree, but are always refined, elegant and musically communicative.

I was quite sad when the time came to return these speakers to Sony, and they certainly will be missed.

If you think these speakers may be just the ticket for you, do given them an audition at Sony's flagship store at 313 Somerset.

I would like to thank Sony Singapore, and it's media partner, Waggener Edstrom for supplying the review sample, and making all the necessary arrangements.

TriTone AV officially opened it's door recently at The Adelphi. Although TriTone is a new face in the industry, Managing Director, Mr. Mervyn Loh is not - having previously worked at Ong Radio as Chief System Designer. Mervyn was professionally trained in the United States in sound projection and psychoacoustics and with his credentials, he is well placed to design and deliver setups for the discerning consumer.

TriTone has three showrooms which showcase setups in different acoustic environments. I especially liked the front showroom at the main entrance. It's furnishing and layout is similar to the living rooms found in many of the newer apartments in Singapore. A second showroom concentrates on audio, while the largest showroom at the rear features a home theater setup.

The first demonstration at the front showroom involved some movie and concert clips being played through a Kaleidescape media player, Marantz AV receiver and Piega speakers. Mervyn demonstrated the effect of Tritone's proprietary tuning using Audyssey MultiEQ and there was a marked improvement in clarity, impact and sweet spot size. The Audyssey settings are adjusted by TriTone based on their analysis of room modes, frequency response, distance and crossover points. The speakers used are also measured with their own hardware. 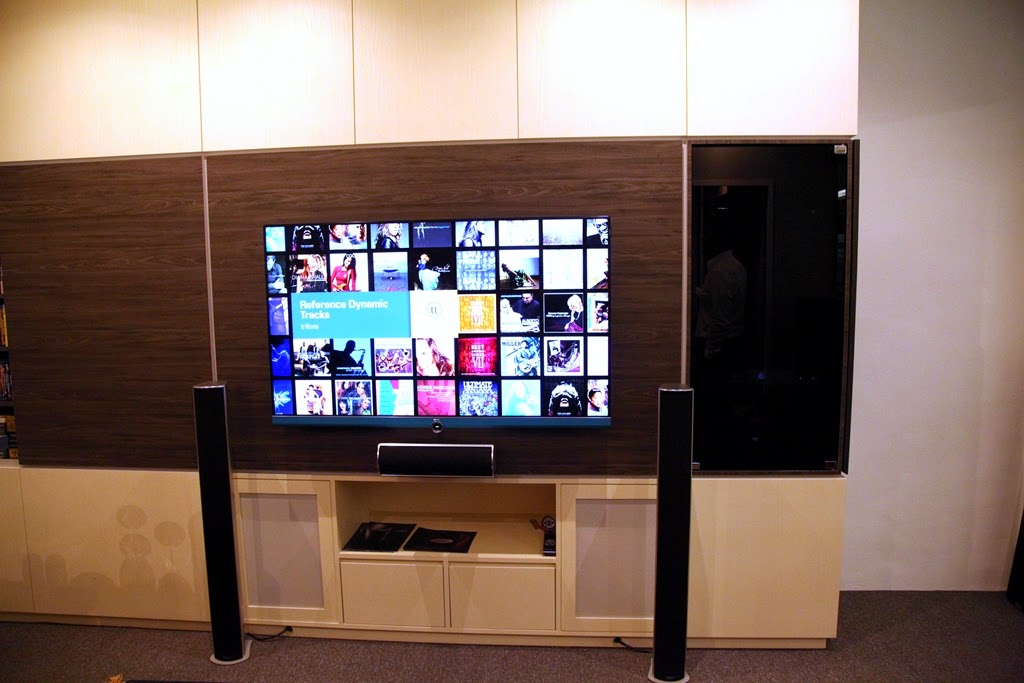 The second demonstration was through an audio setup that consisted of a McIntosh CD player, preamp, room correction module and the venerable MC275 (Mk 6) tube power amp. Legacy speakers completed the picture. 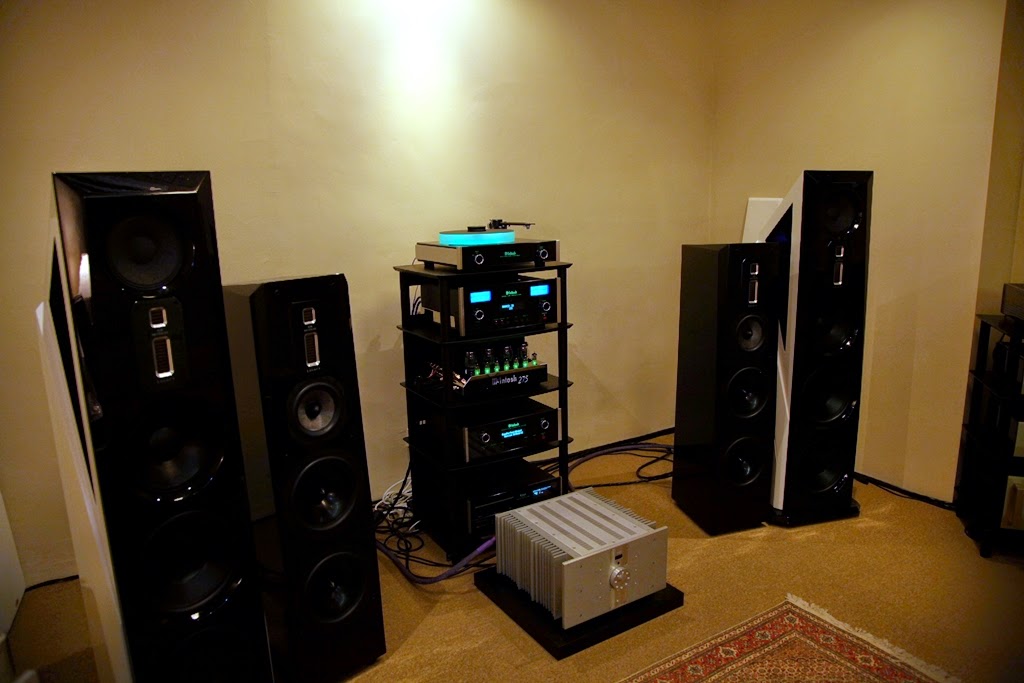 To complete the experience, the last showroom is a generously sized home theater featuring a 110 inch front projection system. The acoustically transparent screen is worth a visit alone - delivering a great picture without the dreaded screen door effect. 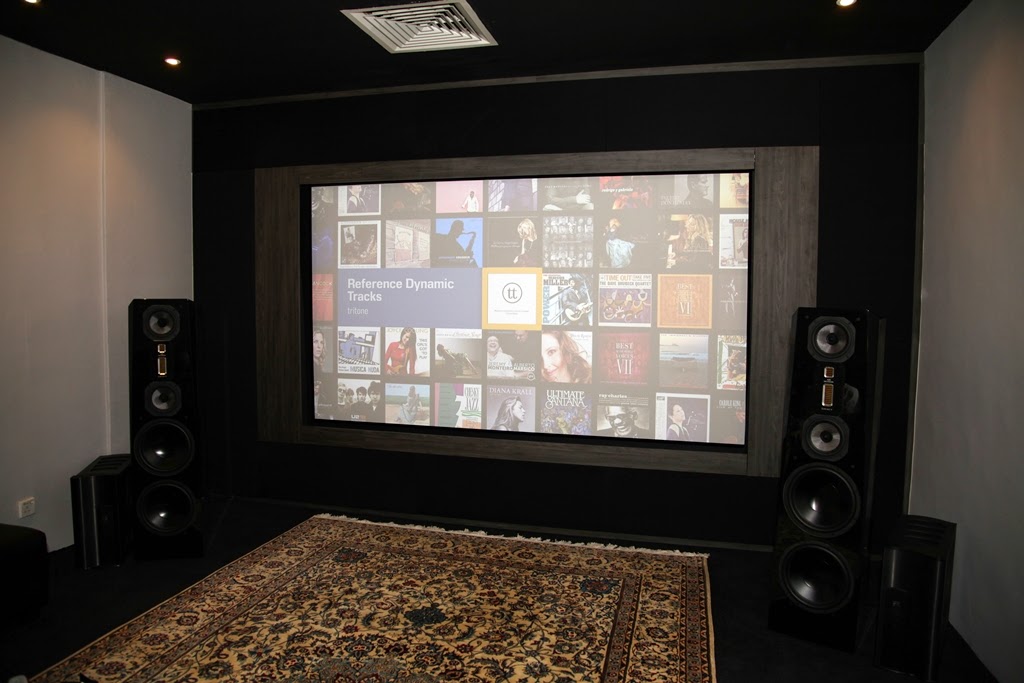 TriTone is the distributor of Legacy Audio and Theta Digital, and an authorised dealer for McIntosh, Kaleidescape, Accuphase and Piega.

Mervyn spoke enthusiastically about his company's unique approach and their specialised in-house knowledge. TriTone believes in setting up systems that are placed and tuned specifically for the client's acoustic environment and taste.

Besides assembling systems from the brands carried in-house, TriTone is also able to work with other components of their client's choice. For their ultimate in customisation, TriTone also offers a bespoke speaker design and build option. Another unusual service offered is a speaker health-check service that is able to offer detailed measurement of the individual drive units to make sure that your speaker is delivering the goods.

I spent some time speaking to Mervyn and was impressed with his technical knowledge and unique approach. Setup is a critical part of getting an audio system to sound good, and I like TriTone's attention to this aspect. Dealer support varies tremendously in Singapore with the box movers on one end of the spectrum (their buck stops when the carton hits the floor of your home !), and on the other end, specialised dealers that will come personally to help you setup and tune your system. Even then, much of the tuning is done according to their taste rather than yours. In that respect, TriTone's approach stands out from the crowd, with a highly customised approach that also ranks high in aesthetic value.

Great to see TriTone in the industry and hope to hear more from them in the future. Pay them a visit to learn more about their unique approach and service.