Do you believe in aftermarket audio fuses ? This is a controversial topic - engineers and other naysayers are quick to point out the ludicrosity of the whole matter. Give it a try. If it makes no difference, you've saved yourself some money. I recently purchased the Telos and Synergistic Research Quantum Fuse and thought it would be nice to run some comparisons between these fuses and some other fuses on the market.

I took a dive into my stack of parts and found a Create Audio Luxury Nano fuse I used some years back. I texted my audiobuddy TC and he passed me a Hi-Fi Tuning Supreme and Super Cryo fuse too.

I tried the fuses on my Conrad Johnson Classic 60 SE power amp, but ended up trying the fuses on a variety of equipment. 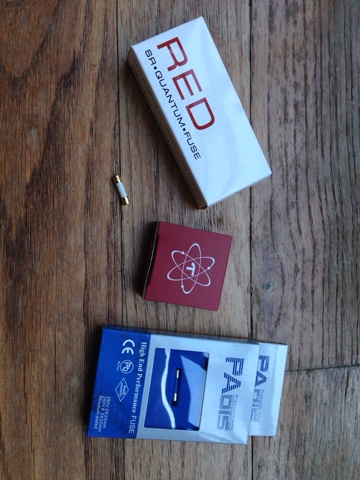 The Red Fuse has a similar tonal balance to the SR20 fuse, but has noticeably more resolution and extension, especially at the top end of the frequency spectrum. It still remains a warm and calm fuse, and should be the antidote for harsh and bright systems.

The Quantum X2 fuse is a sonically more mature version of the QBT-18. There is better low end impact, with a subtle bloom, while both midrange and high frequencies have a sweeter and more refined tone. I am quite impressed with the improvements made over the QBT-18.

Synergistic Research SR20 Quantum Fuses are German made ceramic bodied fuses that have been zapped by SR's Tesla Coil, i.e. 2 million volts of electricity. Although these fuses have no direction markings, the manufacturer is of the view that they are directional and have to be tried both ways.

The Quantum Fuse is smooth and warm. It has good bass weight and a slightly laidback midrange. The top end could be viewed as a bit too nice for some with a bit of restraint in cymbals and air. Despite its balance, it is quite detailed. For those seeking a slightly warmer balance, it would be a toss-up between the Red Fuse, Quantum Fuse and the Super-Cryo Fuse.

The Telos fuse is a new entrant to the fuse market. The QBT-18 is a German made industrial grade fuse that has been cryogenically treated for 36 hours and then run in using Telos's in-house designed QBT burn-in machine for 18 hours.

The QBT-18 impresses with its openness the minute you hit the play button. It is highly detailed, with very precise imaging and staging. It has a leaner low end and midrange compared to the SR Quantum Fuse. The bass notes from Patricia Barber's track, "Like JT" have less weight and impact. There is also a tendency for certain sibilant tracks to come through clearly - in comparison, sibilance is flattered by both the SR Quantum Fuse and Super Cryo Fuse. This could be just the thing for darker and slower sounding systems. I personally found it a bit too bright for my main setup, although it was a perfect match for the warm and smooth sounding Job 225 power amplifier.

Hi-Fi Tuning was one of the earlier manufacturers of hi-fi grade fuses. The Supreme is their top of the range offering. The internal wire material is made out of a silver / gold mix (99 % silver and 1% gold) and soldered using a silver / gold based solder from Mundorf of Germany.

The Supreme is cryogenically treated and subjected to a proprietary quantum treatment. There is no direction marking, but the diagram on the body makes it easy to differentiate the orientation of the fuse.

This fuse has an outstanding reputation but just didn't do it for me. It is pleasingly warm and smooth. However, I felt it obscured detail and lacked the control of the top fuses here in terms of transient control, imaging and staging. This is an expensive fuse, and my expectations were correspondingly high.

I don't know much about this fuse except that it is from Cryo Audio Technology Japan.

However, I do know that this fuse sounds very good in my system. It is sweet, while managing to avoid sounding syrupy or veiled. Pleasingly warm, the Super Cryo Fuse is detailed and well controlled. It lacks a bit of top end extension. Ride cymbals have a good warm strike (more so than usual), but with less obvious decay. In comparison, the SR Quantum Fuse has an overall less prominent cymbal presentation - it's all there, just softer. The Super Cryo Fuse also has less bass weight and slam but just manages to edge out the SR Quantum on the detail front. This is an excellent fuse for the money.

PADIS (Progressive Audio Distribution) is a German manufacturer that sells rhodium plated fuses for high end audio. It is rumoured that PADIS also produces fuses for another well-known audio company. PADIS fuses can be ordered online directly on ebay directly from the manufacturer.

These fuses punch well above their asking price. I found them to be well-balanced, and very detailed at the same time. Both ends of the frequency spectrum are very well-controlled with the high frequencies being subtly more prominent. They also have a very precise rendering of the soundstage, and placement of instruments.

This is an easily available fuse that can be ordered off e-bay from a number of China based sellers. The internal material promises nano material (whatever that means), a ceramic body and gold and rhodium plated ends. The fuse is marked for directionality.

This is an unusual fuse. Bass is warm and rounded, while the midrange is smooth and pleasant. However, the top end is quite sharp and a bit metallic and grainy. It is not a bad fuse, taking into account its very low price. Definitely worth a shot if you are skeptical about fuses, but just want to satisfy your curiosity without too much financial risk. However, this is definitely not state of the art as far as fuses go.

Schurter actually lists their SMD-SPT fuse line as an audio product ! Thankfully, it comes with a non-audiophile price tag. Depending on how hard you look, you should be able to find it for less than US$ 2.00

In my humble opinion, the SMD-SPT handily outperforms the Bussman Ceramic Fuse for negligible price difference.

There is good amount of detail, and nothing seems unduly emphasized. Soundstaging is a bit distant.

If your system is perfectly dialed in, this could be the icing on the cake. This fuse is an absolute no-brainer !

This is a generic glass bodied fuse. Nothing more to say here. Vague and slightly messy. Any of the candidates here can be safely seen as an upgrade. If you refuse to upgrade the fuse, at least experiment with orientation of the fuse.

Shoestring budget ? Consider the Bussman ceramic bodied fuse, which should be available from either your local hardware store, or electronic supply house. Compared to a generic glass bodied fuse, the Bussman adds a slight lift in both transparency and control. The soundstage is also moved backwards for an increased sense of depth. This fuse is easier to obtain than the Schurter, but going the extra mile to hunt down the Schurter is definitely worth the effort.

Fuse rolling provides a surprising amount of latitude in tuning a system. It is also worth noting that all of the fuses on test (including the generic stock fuse) are directional, and sound different both ways.

Dear Erick,
Where can I am fine SR Quantum Fuse in Singapore?

May I have your email?

Have you tried the new Synergistic Research Red Fuses. For me a surprising improvement on the SR Quantum fuses which I thought were good.
Regards

Not yet. But I'm giving serious consideration to buying one just to see how it performs.

I've now placed an order for the SR Red fuse. Will take about 4 weeks to arrive. Stay tuned.

I will be very interested to read your comments after you have tried the fuses for a while. Also whether you find a difference in the way you put them in related to the current flow. That is the writing left to right or right to left.
Regards

I've noticed that all the fuses I tried (even stock ones) sound better one way compared to the other. This is even so for manufacturers who claim that their special fuses are treated both ways and aren't directional.

Most of the comments I have read about the Synergistic fuses have said that having the the writing on the fuse going back to front in relation to the current flow is better. I will be interested in your experience

The SR definitely sounds better one way compared to the other. Let me revisit this and let you know my thoughts on which direction I prefer.

Hello,
Did you receive your Synergistic Research Red Fuse by now ? Could you comapre it to the others ?
One competitor was missing from your test: Furutech Rhodium-Plated.
Do you have any experience with it ?
Thanks.

I've not received the SR Red Fuse yet. I do have a Furutech fuse, but it is in a different size, so it cannot be compared to the rest.

Hi Eric, wondering if you have tried out the Red fuse?

I have received my SR Red Fuse. It is undergoing burn-in at the moment. Will update my blog post in a week or two when I've had the opportunity to try this is a few different components.

have u tried amr gold fuse?

Nope. I have acquired a batch of fuses and this will be added into the comparison soon. They are the SR Red Fuse, Padis, a gold plated industrial fuse and the hot-from-the-factory Telos Quantum X2 Fuse.

Hello Eric.
Thank you for interesting reviews. I'm trying now to find my ideal fuses, and ordered some different fuses for testing in my system. You highly assessed "Super Cryo Fuse", but I can't find it to order for myself. I turned upside down whole internet, but still can't find them. Can you please give me advice, where I can buy it? I need 5A Slow Blow 5х20mm fuse.

I don't think they are being manufactured anymore. I've only seen them on sale pre-owned.

Sorry, I can't be of more help.

You need to check out the Audio Magic Beeswax fuse.

I believe it will redefine what we thought was possible from a fuse upgrade.

Thanks for your efforts to provide these comparisons.
Any chances for evaluate IsoClean and AMR fuses?
Best regards!
Marcelo

Dear Eric,
Unfortunately I live in Brazil and would be expensive to send them to you.
Anyway I purchased a Isoclean to install in my transport (Sony DVP-NS900DV) and it will be a pleasure to share my impression after comparison with the stock one.
Thanks a lot
Marcelo

Thanks. Looking forward to your feedback on the Isoclean fuses.

I picked up the Telos X2 based upon your review. I'm quite impressed by it.

It's refined with a delicate touch and sweet tone. And relaxed for long term listening.

Hi eric
Synergistic has just released their "black quntum" fuse regarded as the best fuse on the planet with a 30 day trial/return as standard. Which demonstrates how confident they are.
Would be nice to hear your findings on those babies. I use ther red fuse.