Telos Audio Design (http://www.telos-audio.com.tw/) was almost unknown in Singapore until recent distribution by local distributor, Audio Basic. Telos has beautiful and well made RCA caps. The interesting thing is the manufacturer's claim of sonic benefits from using these RCA caps to cover unused inputs and outputs. Bear in mind that their caps are of non-shorting design, i.e. there is no shunt of positive to ground.

Telos caps are made of copper and then plated in either gold or platinum. Fit and finish is excellent and is as good as jewelry grade. Insulation is teflon. 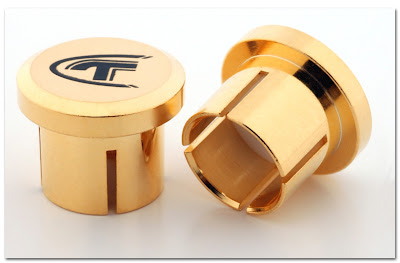 I have had a set of both the gold and platinum caps for some time now but did not quite get around to writing a post on them. Part of the reason is my difficulty in rationalizing why these caps work so well. The manufacturer claims that they protect equipment from stray EMI and RFI. I think the reason is far more complex than suggested.

Both caps have a not so subtle effect. Putting on just a single pair of caps on an unused input lifted the haze that made the system sound homogeneous and blurred. Vocals in particular focussed tightly and instruments became more distinct and in sharper contrast to the background.

The platinum caps were the most dramatic of the two. Vocals actually became slightly more distant but with increased focus and texture. Micro-detail was excellent and the extension of high frequencies, especially hi-hats was particularly impressive. I noticed that the platinum caps tended to accentuate the sense of acoustic space in the recording.

The gold caps in comparison presented vocals in a more forward manner, but with a touch of warmth and smoothness. High frequencies also were more extended but to a lesser degree compared to the platinum caps. Bass notes gained both substance and extension, something which the platinum caps did not really do. Micro-detail was not as good as the platinum caps though.

How many to use ? And should you combine the platinum and gold together ? This is one situation in which you really need to experiment. Here are some observations I notice during my experimentation with these caps,

- The input being covered matters. If you have say three unused inputs, using just a pair of caps on each of those inputs will yield different results.

- Don't just try inputs but also outputs. You can even try covering the coaxial output of your CD player / DAC.

- You can combine them to get the strengths of both caps. But I preferred using the same type of cap throughout as I felt that the system sounded more coherent that way.

- More is not better. My best results were obtained using just a single pair in any one component. In fact using too many causes the sound to collapse and sound shut-in, sounding even worse than stock !

- Although the platinum caps are potent, they can make vocals too sharp and sibilant, especially if you use more than one pair per component.

At their low cost, Telos caps are a must have. I bought a box of the platinum and gold caps, and probably have enough caps to tune 3 or 4  systems.
No comments: