The Yukimu PNA-RCA01 ("RCA Plug") and PNA-USB01 ("USB Plug") are plug-in noise absorbers designed to absorb high-frequency noise from your audio/video components. These products were designed by Mr. Masahiro Yamazaki, an experienced engineer who worked for Matsushita Electric Industrial, specialising in circuit design for the Technics Brand which is part of Matsushita.

A resistor and capacitor circuit is used in conjunction with an electromagnetic wave absorption sheet and metal case of the product to absorb noise. Assuming an output resistance of 220 ohms, Yukimu claims that the RCA Plug attenuates noise at 22 MHz by 18db. R-C circuits are commonly used to reduce noise, so this isn't a snake-oil tweak and is well-grounded in science.

The RCA Plug utilises a brass shell, while the USB Plug uses a A6061 aluminum case. 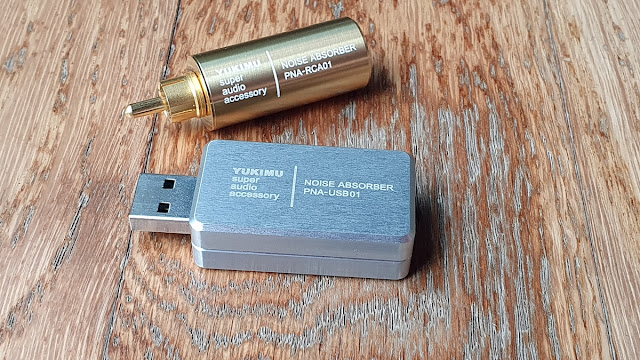 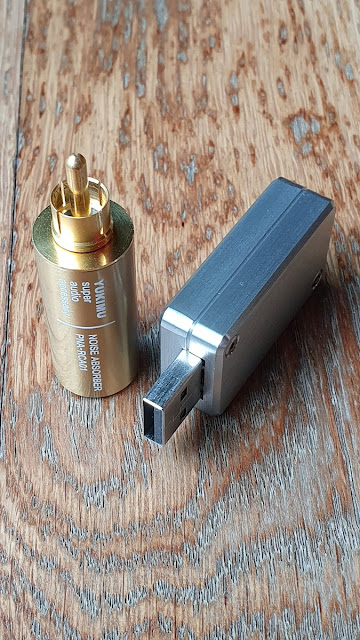 Both products come in a beautiful wood box, with a certificate confirming that the product was manufactured and evaluated by the named employee which just so happened to be Masahiro-san. 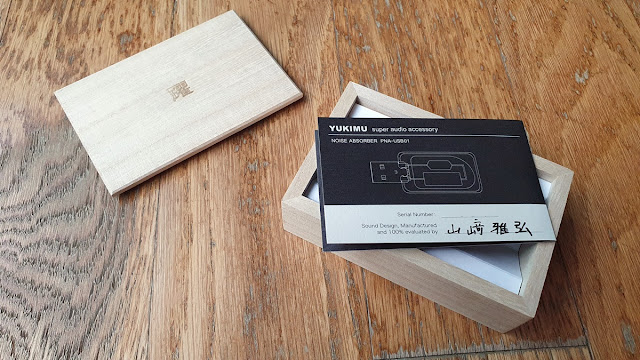 Yukimu's website explains that the RCA Plug can be used on any RCA analog or digital socket (including output sockets).

Like any grounding product, some experimentation is required to get the most out of the Yukimu. On a Schitt Freya+ preamp, the effect of the RCA Plug on each socket varied in intensity. The intensity was highest on a spare input, while the output socket was slightly tamer.

Regardless of location, the effect was quite consistent. You get a tightening of the bass, and clearer and more extended high frequencies. While the midrange clarity and texture improved, there is an increase in "presence" that moves vocals forward in the soundstage. While expressiveness of singers improved, sibilance was also more noticeable.

The preferred intensity will be a matter of taste. I found that the tonality of my system was too forward and bright when used on the input socket, and just right on the output socket.

The effect of the USB Plug is similar, but I found that the increase in dynamics and bass heft to be more pronounced than the RCA Plug, making the USB Plug sound more balanced. Deployed on the front USB port of my Intel-NUC Roon ROCK server, there was an all-round increase in dynamics, clarity and focus. There was less alteration to the tone of my system and if I had to choose just one, my money would be on the USB Plug.

The audiophile mind already predicted that using both products at the same time would result in an overly bright and forward presentation. Somehow, both products sounded quite good together, although the tone was still on the bright side of neutral. Who would have guessed?

This is an effective product that is meticulously made. The price tag is reasonable for the performance although some caution should be noted given the resultant shift in tonal balance. Judicious trial and error is required also to get best results -  Highly Recommended.

Yukimu products are available in Singapore from Audio Basic.